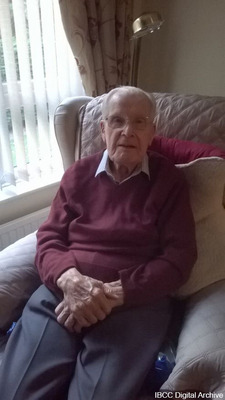 Ronald Huntley enlisted in the Royal Air Force as a flight mechanic before volunteering to join Air Sea Rescue. Born in Edmonton, London, he represented his school in athletics at Crystal Palace and witnessed its destruction by fire in 1936. After leaving school in 1937, several different employment roles preceded his enlistment in the Royal Air Force. Initial training was followed by a 16-week flight mechanic course at RAF Cosford. After several postings on various aircraft, he was at RAF Duxford employed on a modification programme of Typhoon aircraft when he volunteered for the Air Sea Rescue launches. Following a course on diesel engines at RAF Locking, Ron was posted to Padstow and became part of a rescue launch crew where he was responsible for the engine. All kinds of rescues involving both aircraft and shipping covering the Western Approaches were undertaken. Occasionally, they also attended incidents involving holidaymakers around Cornwall. On the 17th April 1944, a Warwick transport plane from 525 Royal Canadian Squadron crashed and Ron’s crew were involved in the retrieval of the bodies along with a lifeboat. They also retrieved large sums of money, and Ron recalls what he experienced and the “hearsay evidence” that evolved. It has also been suggested there was a large amount of gold on board the aircraft. When the war finished, Ron was posted to Northern Ireland where he maintained boats used to shuttle crews out to Sunderland flying boats on Lough Erne.