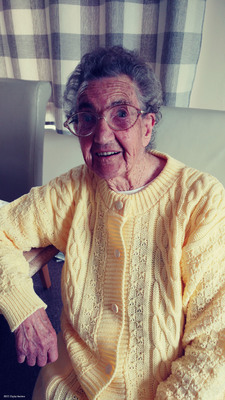 Betty Hedges grew up in South London in the final years before the war and she recalls a happy childhood. She describes a close family and community life where the children played unworried in the streets and she talks about the games they played and the highlights of their time such as the visit of the roundabout. She talks about the humour of the people around her even when the bombing started. She records the fear as the bombing of London began and she lost neighbours and friends. She recalls how visits to the cinema or dance halls was fraught with worry because of the air raids. After leaving school at fourteen she worked at the Peak Freen’s Biscuit factory but as part of the war effort she went to work on the top floor of Harrods which had been requisition by the government and where she sewed sailors uniforms. She also worked as a messenger with the Civil Defence and her father was a warden.