135 items. The collection concerns Terry Ford. He flew operations as a pilot with 75 Squadron. It contains photographs, his log book, operational maps, letters home during training, and documents including emergency drills. There are two albums of photographs, one of navigation logs, and another of target photographs.

The collection has been donated to the IBCC Digital Archive by Julia Burke and catalogued by Barry Hunter. 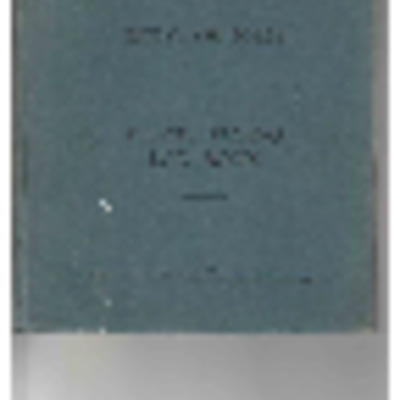 A group of trainee airmen arranged in four rows. On the front are the names of the individuals and on the reverse are the signatures of some of the men. 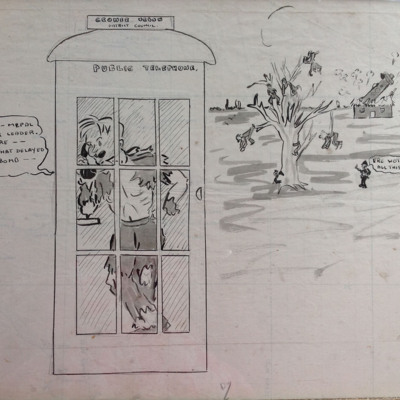 A cartoon of Terry Ford phoning RAF Mepal from a phone box in Norfolk after a delayed action bomb exploded on his aircraft.
Additional information about this item has been kindly provided by the donor.

In the Ceaseless Fight Against the U-Boat 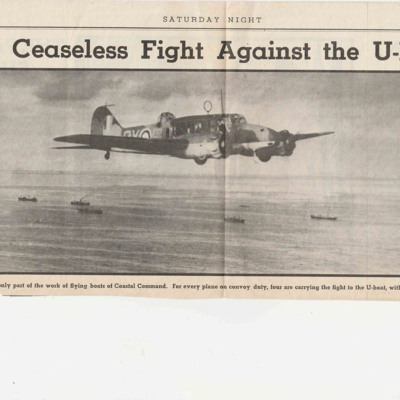 An Anson flying above a convoy. 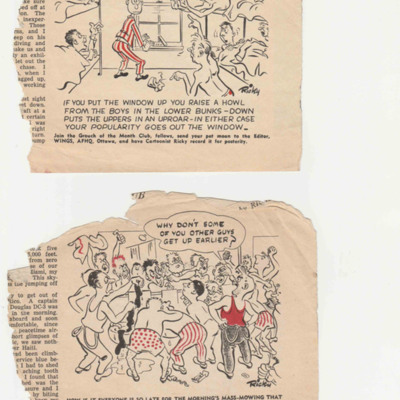 Two cartoons by Ricky published in the RCAF Wings magazine.
In the first, men in a billet are arguing about having the window open. In the second, there is a rush to use the ablutions in the morning. 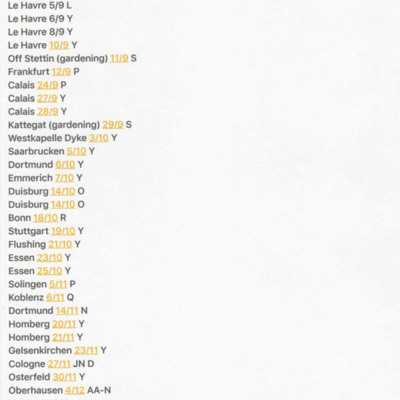 A list of 35 operations undertaken by Terry Ford. It includes dates and aircraft used. 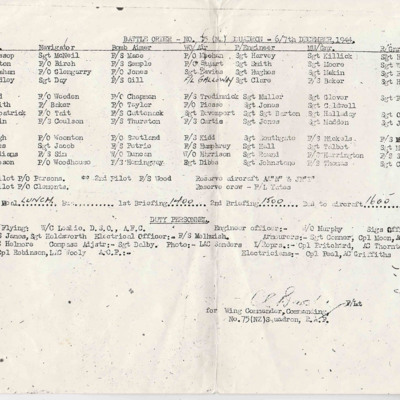 A battle order for 6/7 December 1944 detailing aircrew and aircraft involved in the operation. The target was Merseburg synthetic oil plant. 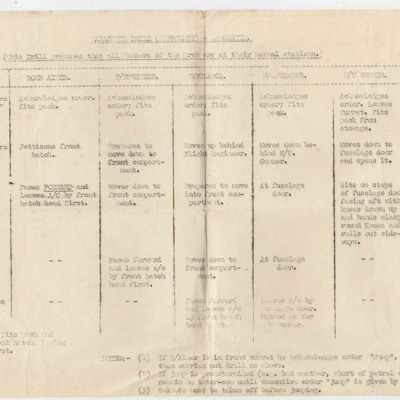 Actions to be performed by each crew member after the order to 'put on parachute' has been made. 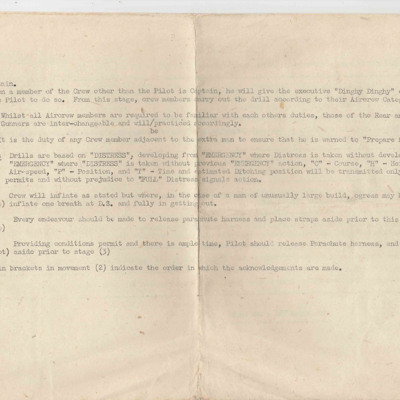 A list of eight actions to be taken before ditching. 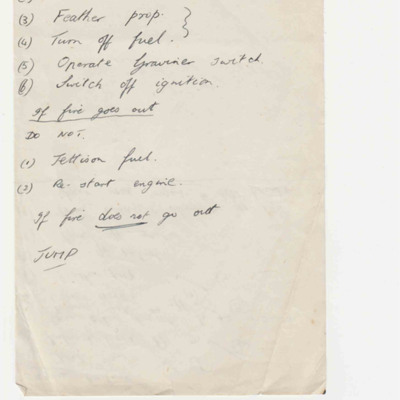 A list of instructions to be followed in case of an engine fire. 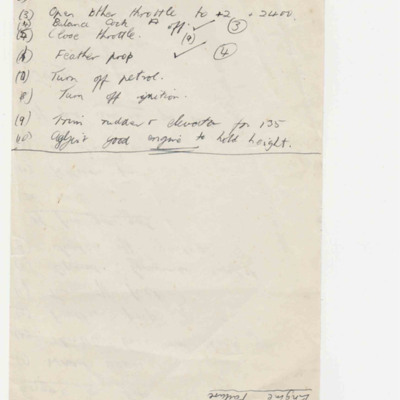 A list of ten items to be checked in the event of an engine failure. 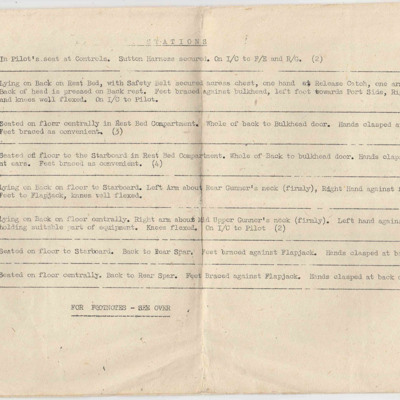 A list of actions to be taken during an emergency. Each crew member is listed with his position and emergency actions. 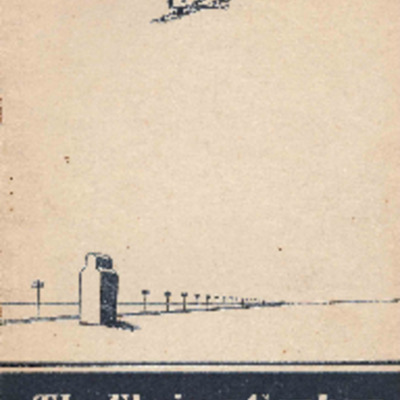 This edition covers an Editorial, poems, the padres notes, romantic fiction, a car chase in London, a list of expenditure of the station's social funds, recollections of flying in the Great War, Christmas stories, Officers Mess gossip, a story about… 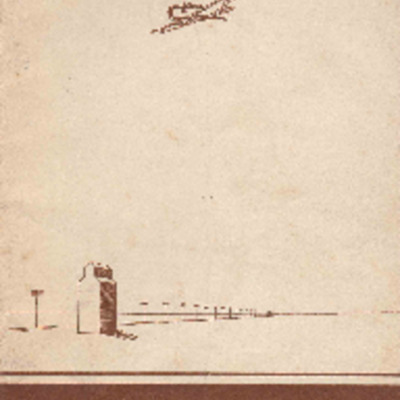 This edition has adverts, an Editorial, reminisces by Dr Vyse, an appreciation of the arrival of the RAF at Weyburn, photographs of Weyburn, stories about Gremlins, a fictitious love story, photos of dances, Weyburn library, poems, love stories, a… 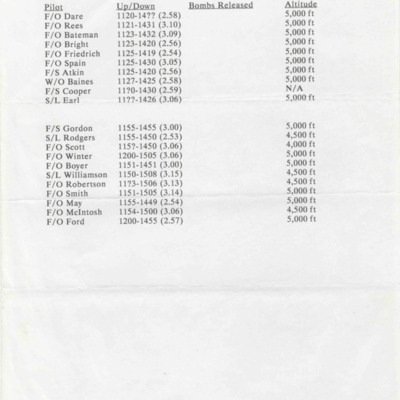 A list of aircrew, times of take off and landings and altitude flown for 75 squadron. 21 Lancasters attacked the dyke at Westkapelle.

Letter to Flight Lieutenant Terry Ford from the Air Ministry 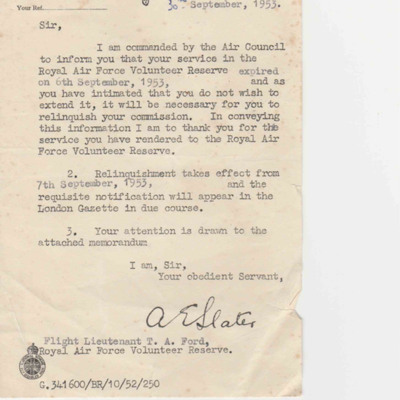 The letter informs Terry that his service in the reserve has expired.

Letter to Terry Ford from Yvonne 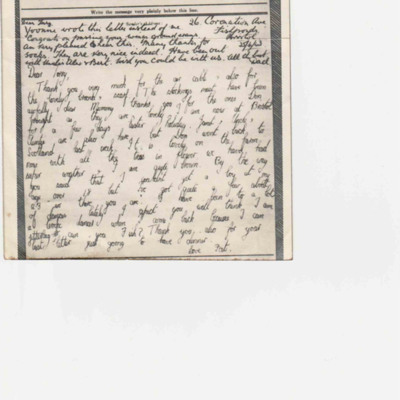 A letter written by Terry's sister, Yvonne. She thanks him for the gifts he posted to her. She has been dancing and can jitterbug. A note written by his father congratulates him on passing his ground exams. 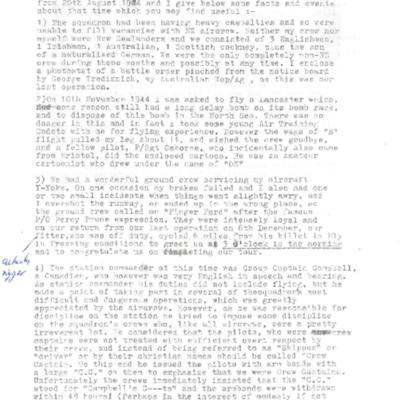 A letter to Bob Moore from Terry Ford about 75 Squadron. He describes how his crew was the only completely non-New Zealanders, a disposal of a long delay bomb in the North Sea, the loyalty of his ground crew, the station Commander and his failed…

Telegram from Terry Ford to Moira 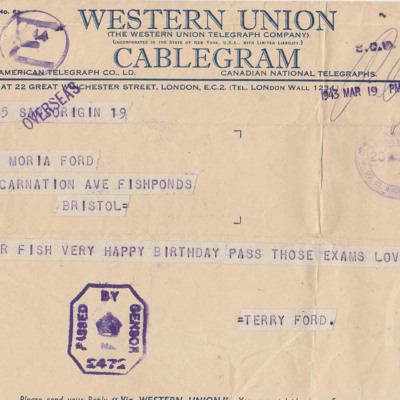 A telegram sent by Terry Ford to his sister, Moira. He wishes her a happy birthday and that she passes her exams.

Telegram from Terry Ford to his Parents 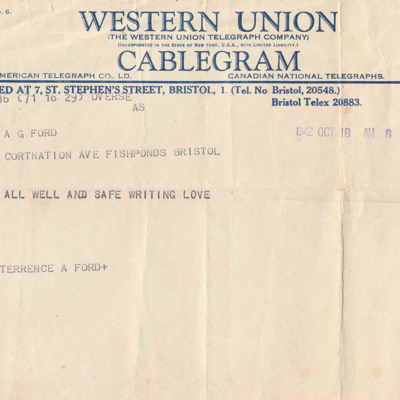 A telegram that Terry sent to his parents stating that all is well and he is safe. 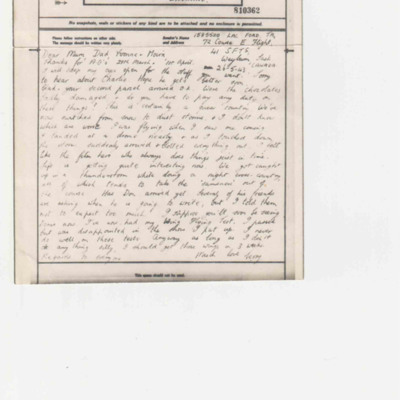 A letter from Terry to his family. He describes how the weather has changed from snow to dust and dust storms. He writes that he has passed his Wings Flying Test but was disappointed with his performance. 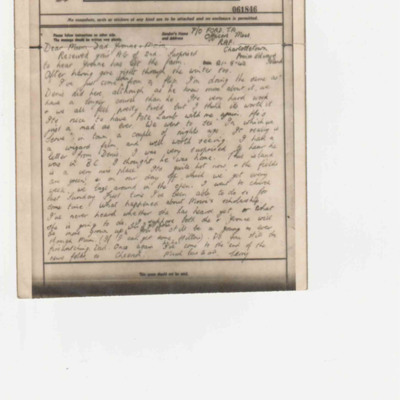 Letter from Terry Ford to his family. He writes about his flying, his friends, social activities and the weather. 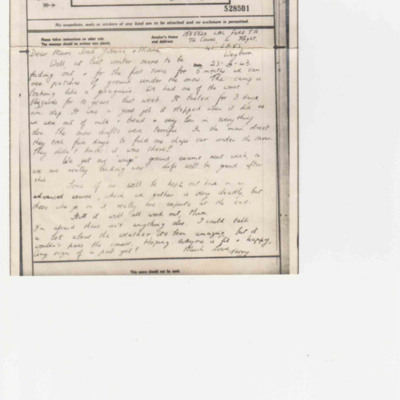 Letter from Terry to his family. He writes about the weather and the terrible blizzards they have had, and about his course which will be complete in a week’s time. 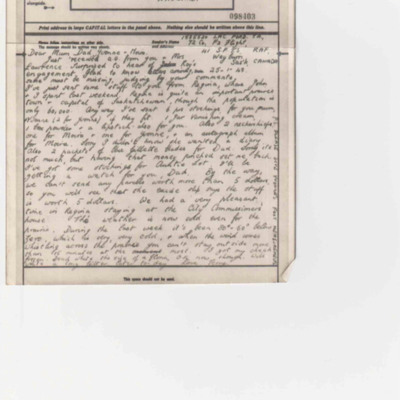 Letter From Terry to his family. He writes that he has just been to Regina and has sent a parcel to them with items he has bought. He also writes about the weather saying that it is well below freezing therefore they are unable to be outside for more…
View all 267 items