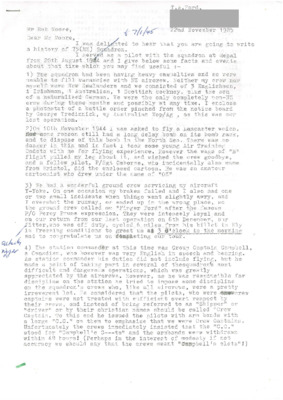 A letter to Bob Moore from Terry Ford about 75 Squadron. He describes how his crew was the only completely non-New Zealanders, a disposal of a long delay bomb in the North Sea, the loyalty of his ground crew, the station Commander and his failed attempts to impose discipline, German scarecrow shells and his crew photographs of a Lancaster in flames and finally his very gung-ho Commanding Officer who joined them on one trip as a rear gunner.

I was delighted to hear that you are going to write a history of 75(NZ) Squadron.

I served as a pilot with the squadron at Mepal from 20th August 1944 [inserted] to 7/1/45 [/inserted] and I give below some facts and events about that time which you may find useful :-

1) The squadron had been having heavy casualties and so were unable to fill vacancies with NZ aircrew. Neither my crew nor myself were New Zealanders and we consisted of 3 Englishmen, 1 Irishman, 1 Australian, 1 Scottish cockney, plus the son of a naturalised German. We were the only completely non-NZ crew during these months and possibly at any time. I enclose a photostat of a battle order pinched from the notice board by George Tredinnick, my Australian Wop/Ag , as this was our last operation.

2) On 10th November 1944 I was asked to fly a Lancaster which, for some reason still had a long delay bomb on its bomb rack, and to dispose of this bomb in the North Sea. There was no danger in this and in fact I took some young Air Training Cadets with me for flying experience. However the wags of "B” flight pulled my leg about it, and wished the crew goodbye, and a fellow pilot, F/Sgt Osborne, who incidentally also came from Bristol, did the enclosed cartoon. He was an amateur cartoonist who drew under the name of "OZ”

3) We had a wonderful ground crew servicing my aircraft Y-Yoke. On one occasion my brakes failed and I also had one or two small incidents when things went slightly awry, and I overshot the runway, or ended up in the wrong place, so the ground crew called me "Finger Ford" after the famous P/O Percy Prune expression. They were intensely loyal and on our return from our last operation on 6th December, our [inserted] actually rigger [/inserted] fitter, who was off duty, cycled 6 miles from his billet in Ely in freezing conditions to greet us a [deleted] s [/deleted] [inserted] t [/inserted] [underlined] 3 0'clock in the morning [/underlined] and to congratulate us on completing our tour.

4) The station commander at this time was Group Captain Campbell, a Canadian, who however was very English in speech and bearing. As station commander his duties did not include flying, but he made a point of taking part in several of thesquadron's [sic] most difficult and dangerous operations, which was greatly appreciated by the aircrews. However, as he was responsible for discipline on the station he tried to impose some discipline on the squadron's crews who, like all aircrews, were a pretty irreverent lot. He considered that the pilots, who were [deleted] the [/deleted] crew captains were not treated with sufficient overt respect by their crews, and instead of being referred to as "Skipper" or "driver" or by their christian names should be called "Crew Captain. To this end he issued the pilots with arm bands with a large "C.C." on them to emphasize that we were Crew Captains. Unfortunately the crews immediately insisted that the "C.C.'' stood for "Campbell's C---ts" and the armbands were withdrawn within 48 hours! (Perhaps in the interest of modesty if not accuracy we should say that the crews meant "Campbell’s clots"!)

(5) The German ack-ack sometimes, during daylight raids, fired special shells over the target, which burst with a large flash and billowed oily smoke. This was apparently meant to simulate an aircraft exploding and thus [deleted] e [/deleted] affect aircrew morale and make them bomb hurriedly. It actually had the opposite effect. We called them “Scarecrows” and sometimes when an aircraft really was shot down the crews would think it was just a scarecrow. On one occasion two Lancasters near me collided, exploded, and fell out of the sky. F/O Charlie Spain who was some distance away reported on his return that he had seen a scarecrow explode and two tiny aircraft had fallen out of it! My air bomber, Neill Chapman, rather against regulations no doubt, took some photographs during actual operations and I enclose a photostat of a rather poor photograph of a scarecrow exploding over Cologne, and another of a Lancaster of 75 squadron going down in flames over Osterfeld in the Ruhr on 30/11/44. I’m afraid the quality is poor and the actual photos are no better than the photstats, but if you would like them, I can send them to you.

(6) W/C Leslie AFC, our C.0. at that time had a "Press On" spirit, which later won him the DSO. He was very keen to get “Maximum Efforts" i.e. every squadron aircraft taking part, when asked to by Group. On one occasion, when Harry Fitzwalter, my rear gunner, fell sick, rather than be an aircraft short, W/C Leslie flew as my rear gunner. This was on a daylight trip to Emmerich on 7th October 1944. to bomb German troops who were encamped in the woods there. W/C Leslie threw out all his ammunition over the target- "In the hope that it would fall on some of the bastards!)

When he was briefing us on operations where we were carrying incendiaries he would end the briefing by saying "Go in and burn the bastards".

With best wishes for the success of your Project.