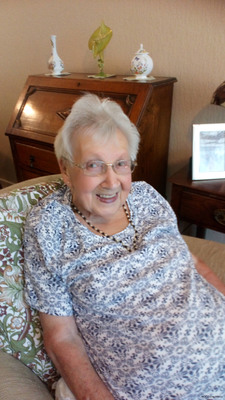 Muriel Blake was born in 1922 in Oakham, Rutland. Being interested in flying and aeroplanes from an early age, Muriel volunteered when her job prospects ended. Called up in 1944, she joined the Women's Auxiliary Air Force. Being too short for driver, and turned down the job of mechanics, she became a safety officer. Throughout her service, she was posted to RAF Waterbeach, RAF Credenhill and RAF Mepal. Muriel recalls her time service stressing unpalatable food. She elaborates on different aspects such as service relationships, parties, celebrations, guard duty and having to wake people up, and finally packing parachutes and dinghies whilst working with 75 Squadron. One of her tasks was also to collect the list of crashed and missing aircraft to know how many parachutes and dinghies had been lost on operations and had to be replaced. It was tradition on her base that aircrew who had survived baling out would return, find out who had packed their parachute and along with their thanks paid the worker a pound. A slipped a disc ended her service in 1945. Following the war, Muriel moved around to several jobs, becoming a telephonist at the post office first, before eventually moving to a fire station