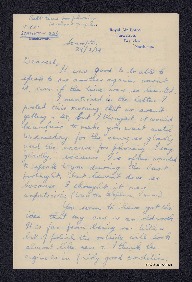 He writes of their bank balance, his new car, domestic details and the timing of his future postings.

[inserted] Best time for phoning is about 7.0 p.m. [/inserted]
TELE: [underlined] SCAMPTON 226 [/underlined]
[deleted] Brackley 191 [/deleted]
Royal Air Force,
Turweston,
Brackley,
Northants.
Scampton
29/5/44
Dearest,
It was good to be able to speak to one another again, wasn’t it, even if the time was so limited.
I mentioned in the letter I posted this morning that we aren’t getting a 48, but I thought it would be unfair to make you wait until Wednesday for the news, so gladly used the excuse for phoning. I say “gladly,” because I’ve often wanted to speak to you during the last fortnight, but haven’t done so because I thought it was unpatriotic. (to use the telephone, I mean)
You seem to have got the idea that my car is an old wreck. It is far from being so. With a bit of polish the outside will look almost like new & I think the engine is in fairly good condition.
[page break]
2
I think, according to present prices, that I am getting quite a good bargain. The tyres are worn smooth but no more than that. I am getting new ones mainly because these are available and [inserted] also [/inserted] as an extra safety precaution. I reckon the cost will be £36 for car & tyres, £4 for insurance & £6 for tax to the end of the year – say £45.
At the end of April, our account was, I believe, £143. Since then I have drawn out approximately £20 using my cheque books. To that must be added £51 for war savings, so that, not counting any other cheques taken out of your book, our account is down to about £30 when I’ve paid for this car.
On the other hand, there should be paid in during May £8..0..0 for the April living out money, and at the end of April, £28 [deleted] £30 [/deleted] or £30
[page break]
3
(I’m not sure how much they’ll deduct for income tax) for my new pay. On the first of June, then, our account should be as follows:
At 30th April: £143
[underlined] Less [/underlined]:
£20 (personal exp.)
[underlined] £51 [/underlined] (Nat. savings)
£71
[underlined] Plus [/underlined]:
£8..0..0 (living out allowance for April)
[underlined] £30 [/underlined] Pay for May.
£38
Net reduction of £33 during May, leaving a total of £110. Out of this has to come £45 for my car, leaving you £65 to play with. (Of course, I haven’t allowed for any cheques out of your book except that for Savings Certificates). I shall be interested to see if the June statement from the bank agrees with my reckoning.
As for the insurance, I merely thought that you could get it cheaper than I could, since I am so blatantly aircrew. As
[page break]
4
long as we get it, I don’t think it matters much how we do it.
I was amused this morning to get two 2d stamps from the Post Office, in repayment of that 4d I wasted when trying to ring Brackley Station from Silverstone.
You are a cheerful soul, aren’t you, hoping that the M.O. would ground me! You ought to know that M.O.s don’t do that sort of thing to me.
My laundry has gone off this time; I only hope it comes back safely. The snag, of course, is that next week we expect to be leaving on Wednesday, [inserted] (June 7th) [/inserted] so I don’t know if it will be wise to send any then. Anyway, I shan’t send any to you, darling, despite your generous offer, unless I really am pushed. I think you’ve done quite enough washing
[page break]
5
for the time being.
If you really think it would be worth while for you to live at Vicarage Cottage again, by all means write & ask Mrs. Hudson (Glebe Farm, Burton Joyce, Notts). I think it would be very lonely for you, but I’d give anything to get you settled. Ossington wouldn’t be inconvenient for me, either, now that I’ve got a car, but it’s your own decision entirely, because it’s you who will have to live there. If you think it’s worth trying, have a go at it. You can always give up the tenancy if you find it unsatisfactory.
I trust you don’t find that my new rank has gone to my head! Is that why you
[page break]
6
address me as “Dear Flight Lieutenant”? Or is it, as I prefer to believe, that I am still dear to you even though I have got a higher rank? Incidentally, I still find it difficult to realise that I have the same standing now as all the other F/L.s on the station. I’ve still got a bit of that F/O feeling in me!
I’ve been trying to consider this living out question, & I don’t think it’s very easy. Wigsley is an isolated spot, but I’ll certainly inquire when I get there (a) whether I’m allowed to live out, (b) if there are any places to live in.
I expect to be there for four weeks (with a very vague possibility of leave at the end of it) and then shall go to Syerston for two weeks. By the middle
[page break]
7
of August I ought to be on a squadron, & stay there for four or five months. My feeling, at the moment, is that your best plan would be to find a permanent residence in this district – near Lincoln or Newark. Otherwise, you will have to make three moves in two months.
Mrs Hudson’s cottage would be as good as anything, I think. It’s more remote, but that isn’t so important with a car, & it’s certainly more comfortable than digs.
Anyway, I feel that if I discuss this any further my head will be in a whirl. Don’t forget that you must write only when it’s convenient, now that I’ve finished sending you letters demanding urgent answers!
All my love, darling,
Harold.
P.T.O.
[page break]
P.S. I’ve carefully saved last week’s chocolate ration to give you when we met. Now I shall regretfully have to eat it!