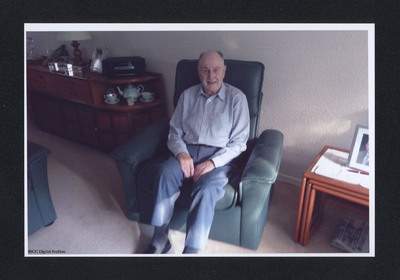 Ron Baker, originally from Willesden was in the ATC before joining the RAF and trained as a flight mechanic. He was posted to 463 Squadron at Waddington. On one occasion he had to help to remove the body of a gunner who had died during the flight. He recalls one day when the usual routine of operations was changed to an earlier than usual take off time. That was D-Day. His duties included waiting through the night for the return of his aircraft and to guide them back to their dispersal point. One member of the ground staff waited through the night in case the aircraft came back early. Eventually Ron volunteered to join the Fleet Air Arm as a mechanic before being demobbed.