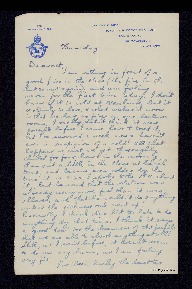 He writes of the weather and life at RAF Silverstone.

TEL. SILVERSTONE 252
OFFICERS’ MESS,
ROYAL AIR FORCE STATION,
SILVERSTONE,
NR. TOWCESTER,
NORTHANTS
[Royal Air Force crest]
Thursday.
Dearest,
I am sitting in front of a good fire in the Mess (the fire in the hut is out again), and am feeling warm for the first time today. I don’t know if it is cold at Newhouse, but it certainly is here, & what makes it worse is that we have no fires in our lecture rooms. I really didn’t think it was possible before I came here & tried it, but I’ve survived a week now & haven’t even a suspicion of a cold! All that happens is that we get thoroughly chilled for four hours in the morning, thaw out a little in the Mess at lunch time, and become even colder by the time it is 5.30. I spoke to the M.O. about it, but he said that the station was already using more fuel than it was allowed, and that he couldn’t do anything unless the sickness rate went up!
Personally I think it’s a bit too late to do anything by that time. I think it says a good deal for the keenness of the pupils that we are able to absorb anything at all! Still, as I said before, it doesn’t seem to do me any harm, as I am feeling very fit.
I’ve been lucky the last two
[page break]
2
days as I’ve had two letters from you. Yesterday’s is at the billet, so I’ll try & answer that when I get back. Your parcel has also arrived, but I haven’t had time to collect it yet. Would it be asking too much if I sent you another lot of washing next week? I should have sent some last Sunday, but I couldn’t change as I hadn’t been able to get hold of my kit, and it won’t be any use sending some on Sunday, as we shall be going to Turweston, the satellite, on Wednesday, & my laundry might easily get lost. I’m being economical as I can with it, & won’t send any if I can manage.
Yesterday I & another ex-instructor – also for a headless crew – went to see the C.I. He was very decent indeed & treated us with the respect [inserted] (?) [/inserted] due to our seniority. The good point that emerged from the interview was that we shall only do about 20 hrs. instead of the normal 30 or 40 at the satellite, and then shall be able to go to the Con unit. I’m all for the idea, personally, as I want to get away from here as soon as possible.
[page break]
3.
My driving licence arrived today, & also the St. John’s College list. I’m sending it with this letter, so perhaps you could park it with the rest of my junk.
I suppose you realise that I’ve done no flying yet & shan’t do any until the end of next week at the earliest.
I’m sorry you didn’t see Rocyn Jones. Even if he can’t do anything about your feet, I think it’s worth doing all you can, [deleted] to [/deleted] because it ought to make things better for you. I don’t suppose you’ll get another opportunity for a long time now.
I shall be very interested to see the result of your adverts. I certainly hope something comes of it, as I’d very much like us to have our own house again. I’m not surprised that Iltyd has given up the idea of buying another farm. Did you see in the paper that at a sale in Lincolnshire last week, farms of 100 – 150 acres realised, in one case,
[page break]
4
£98 per acre? Amazing, isn’t it?
As for Bert & Jim, all I can say is that it’s a pity they’re not in the Army. They’d soon sit up & take notice then.
I think I said in my last letter that Mother never mentioned the Ops business. All she said about it was that she hoped I shouldn’t find the lectures too difficult! Actually I though her silence was a bit too obvious – trying to avoid saying anything that might depress me.
I don’t think I shall volunteer for a second tour. I [underlined] might [/underlined] agree to do a longer first tour in order to go on Pathfinders, but that will depend on how I feel when I’m on the Squadron. You can volunteer for a second tour but you can also be posted on to one. It’s all a matter of luck, I think.
These Labour Exchange people [underlined] are [/underlined] the limit, aren’t they. At least it’s very decent of them to wait while you find a house, but why on earth won’t they give you a permit? Did you ask them for one,
[page break]
5
or did they just not mention it? Still, I think the best thing would be to get a house if possible, & then you ought to be able to get a job that wouldn’t involve travelling.
That’s all for now, darling, until I go back to the billet and answer yesterday’s letter.
All my love,
Harold.
P.S. I’ve got my nail file, so keep the two you’ve got.
I entirely agree with what you say about going out on your own. It’s lousy here for me too, as the presence of several hundred R.A.F. & Waaf is quite inadequate as a substitute for you.
My Bank pass – book definitely seems to have disappeared!