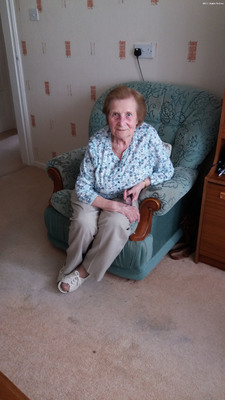 Sybil was born in Bracebridge near Lincoln, she went to Bracebridge School then left at fourteen to work first at a Co-op store and then at and electric shop. Sybil talks about civilian life in wartime, her family working at Foster Quinns, fire watches, shelters, and people moving to Lincoln from Sheffield. She recollects meeting her husband, then moving to office work at Hudsons after the end of the war. She married in 1951. Reminisces receiving a telegram about the loss of her brother Alec Henry Peadon, killed after he bailed out over Belgium.