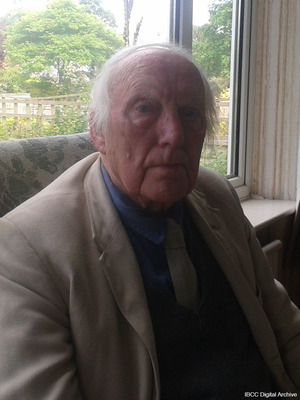 Dennis was born in 1924 and joined the Royal Air Force in November 1942. He trained as a flight mechanic airframe at RAF Locking and was responsible for the whole of the aircraft, apart from the engines and the guns. Dennis explained the emergency landing grounds at RAF Manston, RAF Woodbridge and RAF Carnaby, which were wider to allow damaged aircraft to land safely. His last six months of service were spent in Italy, Egypt and Palestine with a C-47 squadron of Transport Command.
Sometimes Dennis was on special night duty alone in a hut a mile away from the control tower. His job was to operate the lighting system on receiving an order from the control tower. He referred to a memorable incident when a Lancaster landed safely and some of the crew kissed the ground.
When the invasion of Normandy began Dennis was transferred to a C-47 squadron. At the end of the war he went up in a Halifax to retrace some of the routes the bombers had taken and to witness the devastation. He left the RAF in 1947. In 1981 Dennis was seconded to the City University of New York.