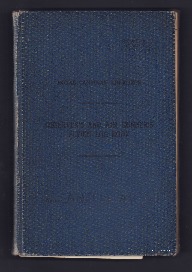 Royal Canadian Air Force observer’s and air gunner’s log book for Sergeant Albert Victor Ansell from 25 October 1942 to 30 April 1943. Detailing his flying training and operations flown. He was stationed at Pan American Airways navigation school Miami, RAF Bobbington, RAF Cottesmore, RAF Winthorpe and RAF Scampton. Aircraft flown in were, Commodore, Anson, Wellington, Manchester and Lancaster. He trained as a navigator in the United States and flew three operations with 57 Squadron from RAF Scampton in April 1943. Targets were, Duisburg, Ameland and lost on an operation to Essen. Stamped ‘Failed to return, death presumed 30 April 1943’.