Letter from Reg Wilson to his Parents 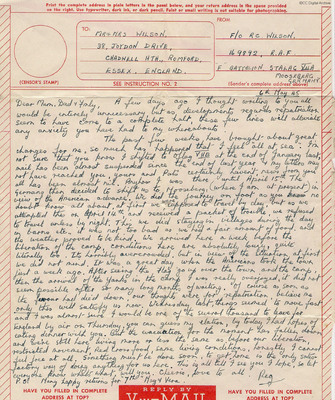 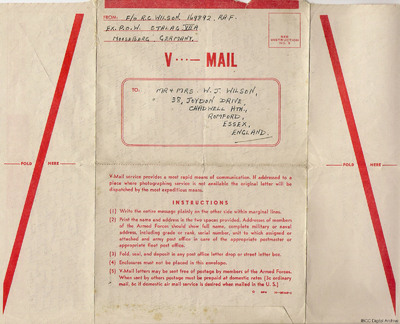 Letter from Reg Wilson to his Parents

Reg has been moved to another camp, on foot and at night. Their camp was liberated by the Americans. He is frustrated that he cannot get home since they are restricted to camp.

One printed sheet with handwritten message

Dear Mum, Dad & Fmly, A few days ago I thought writing to you all would be entirely unnecessary, but as developments regards repatriation seem to have come to a complete halt, these few lines will alleviate any anxiety you have had to my whereabouts.

The past few weeks have brought about great changes for me, so much has happened that I feel “all at sea”. I’m not sure that you know I shifted to Oflag VIIB at the end of January last, mail has been almost suspended since the end of last year & my letters may not have reached you, yours and Pat’s certainly haven’t, news from you all has been almost nil. Anyhow I was there until April 15th The Germans then decided to shift us to Mooseberg, (where I am at present) in view of the American advance. We did the journey on foot as you [deleted] know [/deleted] no doubt know all about, at first we [inserted] were [/inserted] supposed to travel by day, but as we attempted this on April 14th, and received a packet of trouble, we refused to travel unless by night. This we did staying in villages during the day in barns etc., it was not too bad as we had a fair amount of food, and the weather proved to be kind. We arrived here a week before the liberation of the camp, conditions here are absolutely louzy, [sic] quite literally too. Its horribly overcrowded, but in view of the situation at first we did not mind. It was a great day when the Americans took the town just a week ago. After seeing the Flag go up over the town and the camp, then the arrival of the Yanks in the camp I was really overjoyed, it did not seem possible after so many long months of waiting. Of course as soon as the fervour had died down, our thoughts were for repatriation, believe me [underlined] only [/underlined] this will satisfy us now. Wednesday last, things seemed to move fast and I was almost sure I would be one of the several thousand to leave for England by air on Thursday, you can guess my elation, by today I had hopes of eating dinner with you. But the evacuation for the moment has fallen down and we’re still here living more or less the same as before our liberation, restricted movement, Red Cross food, same living conditions, honestly I cannot feel free at all. Something must be done soon, to get home is the only satisfactory way of doing anything for us here. This is all till I see you I hope, so let everyone know what’s what, will you. Cheerio, Love to all. Reg