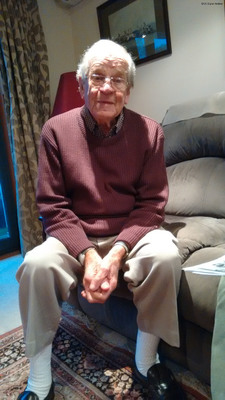 Eddie Worsdale was working as a furniture salesman in Wellington, New Zealand after the Depression era curtailed his education. His brother volunteered for the New Zealand Air Force and so Eddie followed him. After initial training he continued his training in Canada before arriving in the UK and being posted to 75 Squadron at RAF Mildenhall. On an operations to Milan their Wellington aircraft was shot down. One crew member baled out and Eddie and his crewmate escaped from the burning aircraft. They then set off to walk to Switzerland. Eddie was employed as a cipher clerk for the secret intelligence service which gave him access to top secret information. The decision was made that he and other evaders would make the journey back to the UK via Spain. After his return to New Zealand he was posted to the Islands as a cipher clerk for the rest of the war.