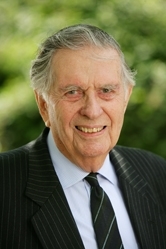 Squadron Leader Geoffrey Whittle was born in London. After leaving school at fourteen he became an apprentice printer in the family business. He volunteered for the Royal Air Force on the outbreak of the Second World War and trained as a navigator. He served with 101 Squadron at RAF Ludford Magna. For his fifteenth operation to Hanover, he was awarded the DFM. Having suffered a perforated eardrum on his sixteenth operation, he was grounded for six months. He then flew briefly with Air Sea Rescue. At end of the war, he joined the RAF Regiment on a short-term commission but continued to serve on both ground and flying duties until retirement in 1961. He then worked with the NAAFI (Navy Army and Air Force Institutes), becoming a senior manager, until 1988. He subsequently became a councillor in Hampshire and Lincolnshire.