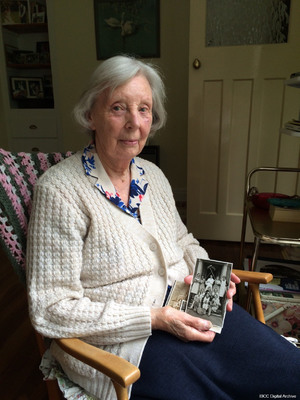 Joan Raettig (nee McGuire) was born in Hull and at the age of fourteen was evacuated to Scarborough, the day before war broke out. She experienced the bombing of Hull and spent nearly two years sleeping in an air raid shelter because they were fed up of getting up and down every night, due to the frequency of the bombing. She describes her life during this time, houses being flattened, shops that were bombed in the city relocating into museums and store rooms, her family’s experience of food and clothing rationing and how they managed during the war. At sixteen she studied horticulture and food production, before moving to Ascombe Bryan, and then returning to Hull. She met her husband in 1948, who was RAF ground personnel, they married in 1952 and settled and raised their family in Hull.