Letter from Harold Wakefield to his parents 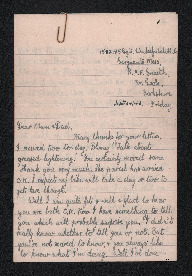 Letter from Harold Wakefield to his parents

Writes about operations to Hanover and Mannheim. Describes fires after attacks, poor German defences and German fighter attacks. Offers some sympathy to Germans on the ground and describes a fighter attacking them. Describes their first trip to Hanover and feeling nervous and relates other impressions. Writes of his reactions to operations. Continues with other gossip and mentions rest between operations and that they will do 30 and then have a rest.

Many thanks for your letters. I received two to-day. Blimey! Talk about greased lightening! You certainly moved some. Thank you very much. The parcel has arrived O.K. I expect my bike will take a day or two to get here though.

Well I am quite fit & well & glad to hear you are both O.K. Now I have something to tell you which will probably surprise you. I didn't really know whether to tell you or not. But you're not scared to know, & you always like to know what I'm doing. Well I've done

two ops. It was grand, really grand. Talk about fun & excitement. I was on Wed. night 22nd. We went to Hanover. You've probably read about it by now. Then I was on again last night Thursday 23rd. This time to Mannheim.

Two in two nights, its not often that happens. We do on average two or three a week.

I enjoyed every minute of it, & believe me theres not much of those two cities left. Jerry's certainly going through it. One minute the place is peaceful & then in about 30 mins. its a mass of blazing ruins, on fire from end to end. Flames & smoke thousands of feet high. They're just swamped. I could still see the fires burning, the glow in the sky, when we were 200 miles away & thats not exagerating.[sic] Plane after plane, one after the other, just shoving 'em down. Poor Jerry. Its terrible what they're going through. But we enjoy doing it just the same. Their defences aren't bad, but

just bewildered. We're all in & out so quickly that they don't have time to get going. Their flak doesn't seem to be able to reach [inserted] us [/inserted]. But it explodes underneath us & shakes us a bit, it's quite a pleasant sensation though. They rely chiefly on their night fighters. But they're not so hot. Nothing we can't deal with, & if we see them coming first they don't stand an earthly because there are eight belching machine guns waiting for 'em. & I've seen more than one Jerry fighter going down in flames, bless 'em. Yes I'd much sooner be up were [sic] we are than down below at Jerry's end. He know's [sic] what bombing is now alright, believe me. Its mass slaughter, with Jerry at the receiving end, & he won't be able to stand it much longer. Hanover & Mannheim are heaps of rubble now, & I'll bet those fires will burn for days.I think the Jerry firemen are the hardest worked blokes of the war.

We've had no trouble at all yet, & I've done

my job to the satisfaction of everyone.

Johnny our pilot is wonderful. He can throw out kite about like an Austin seven. A searchlight picked us up over Hanover but Johnny was out of that in about 2 seconds. A fighter got on our tail but Jock had him spotted, and told Johnny, a couple of twists & turns & that fighter was soon disposed off, [sic] he lost us altogether. Poor old Jock was mad though because he didn't have a burst at it. There's no need for guns on our kite because Johnny can lose 'em in two shakes. Its a piece of cake.

The first trip on Wed. night to Hanover we weren't nervous, more excited. The only time we were scared, was when we arrived a little way off the target. When we saw the fires, searchlights & ack-ack, we did feel nervous for a second but it passed over. Johnny said, "O.K. blokes I'm not stopping here long, it ain't healthy, lets get back for the egg & bacon". So he turned

in, opened up the engines, put the nose down for extra speed, & dived over Hanover at about 250, dropped the goods & were out again, all in about 2 mins. One [inserted] of [/inserted] the lads said over the intercom. 'Coo, ain't it pretty'. Another said, 'Blimey, its just like Blackpool illuminations'. Some of the things they say are really funny. Last night I wasn't the slightest bit nervous or excited, honestly. Its rather boring.

We have egg & bacon before we go, & again as soon as we get back. Its worth it to get two lots of egg & bacon.

We've got a rest for two or three nights now, to catch up on our sleep. I don't feel any different. My nerves are better if anything. Its nice on the way back home, when we get [deleted] back [/deleted] well away from the target & get the coffee out, & chocolates. It makes me hungry.

Well I thought you'd want to know, because

you've always liked to know what I'm going, & I thought you'd be getting suspicious if I didn't tell you soon. But there's no reason at all for you to worry, because I know I'm going to be O.K. & I've always got my parachute handy.

We only [deleted] two [/deleted] [inserted] do [/inserted] about two trips a week, but by the time I come on leave I'll have a few in, & I'll have quite a bit to tell you.

Anyway I thought you'd like to know, & I know Mother will enjoy telling everyone, Ally's been over Jerry land.

Its funny to listen to the description of it on the news & know you [deleted] whe [/deleted] were there.

I expect my bike will get here about Monday. I haven't heard from Betty yet. I won't say anything to her about my ops.

You can tell her or not, just as you like.

We do 30 ops. then have a rest for about 6 months as instructors, before doing a second 30 ops. 30 ops is called a 'tour of ops.' So we [inserted] do [/inserted] a tour then rest for 6 months then do our second tour. But I guess the war will be over before I get on to my second tour.

Well that about all for now, I'll write again Tues or Wed. & let you know then if my bike has arrived, I expect it'll come before then though, & thanks again for rushing it over like that, talk about move.

So Dennis has been home again. Its only about a fortnight since he had 10 days leave. Still I've got 14 days on the way.

All my very best love
Ally [three rows of kisses]

P.S. I'd like to take Mr. Percival with me on a trip it'd do him good to see what Jerry's getting.