Letter to Joan Wareing from Margaret 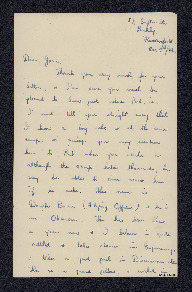 Letter to Joan Wareing from Margaret

Letter from Margaret to her friend Joan. She writes that Joan must be pleased to have found out where her husband, Bob, is and that her very good friend’s son is also at the same prisoner of war camp and has been there for over a year. She also writes about her up coming holiday to Blackpool for Christmas and has managed to find accommodation.
She says that she is looking after her son’s crew’s mascot, a small dog of 7 months old. She says that her family are all well and is very pleased that Bob has turned up safe and sound.

39, Sufton St.,
Birkby,
Huddersfield.
Nov. 4th/44.
Dear Joan,
Thank you very much for your letter, & I’m sure you must be pleased to know just where Bob is. I must tell you straight away that I know a boy who is at the same camp, so perhaps you may mention him to Bob when you write, as although the camp holds thousands, he may be able to come across him if he asks. This name is Douglas Bowie (Flying Officer) & he is an Observer. He has been there a year now & I believe is quite settled & takes classes in Engineering, & takes a good part in Discussions etc. He is a grand fellow, & worked in
[page break]
the Electrical & Controls Drawing Office at “Hops” & knows Ernest, Jack Barker & me (of course) & he was a very clever boy. His widowed mother works at Hops too & his brother (there were only 2 boys) was killed in training in Canada. He had just passed as a pilot. His mother is a great friend of mine as a matter of fact she is going with Mother & I to Blackpool at Xmas. She has been wonderful to me, knowing what it is like, with 1 boy killed & the other prisoner-of-war. She says she’ll write Dougie & tell him to look out for Bob (although I must say, she thinks they’ll be home before they receive the letters – but she’ll still write just in case) She hasn’t heard from Dougie for a long time now, as letters don’t seem to
[page break]
2.
be coming through so well now.
You say some of the patterns have come – would you mind sending them on – as I’ve a dress & a skirt to make & I’m needing a pattern, so perhaps I could be using them.
Mother, Jack & I were glad to hear you liked your handbag, & your Mother is pleased with [inserted] her [/inserted] shopping bag, & tell your Mum that Jimmy will try & make her a little purse. Give her my love & I hope her holiday did her good.
Mother says I’ve to tell you we got in all right at Blackpool, at what seems to be a very nice hotel, on the new part of the South Shore. We had a job to get in, as
[page break]
half the places are full, & the other half aren’t opening. It is the first time I’ve been away at Xmas, but I don’t feel as if I can face this one at home, & also it will do Mother good as she hasn’t been away for about 7 or 8 yrs.
I don’t know whether I told you that we sent for the puppy mascot that Ernest’s crew had; & his Mother has it, but she’s had to go down to London to her sister who is ill, so for a week or two, we’ve got him at home. He’s about the size of a spaniel (black & white) but has a terrier’s head & altogether, to me, he’s like a very small sheepdog – He’s only 7 mnths old yet & is a grand little chap, but takes some looking after.
[page break]
3.
We gave him his first bath today & so now he’s all fluffy & looks grand.
Well, Joan, everyone here is fairly well at present. Dad has pulled a ligament in his leg & is hobbling about, but it is mending. Mother is fairly well, also Jack. I am feeling much better, but wish I knew something definite & could settle my mind a bit. I ought to have learned my lesson in patience when I do hear, as it is 6 months now since he was missing, & still no definite news of him.
Well Joan, I’ll finish by saying I’m very pleased Bob turned up safe & well, & he’ll be coming back to you someday, & hope you’re feeling better now,
All my love
Margaret.