258 items. The collection concerns Flight Lieutenant Robert Wareing DFC* (86325 Royal Air Force) and contains his flying logbooks, prisoner of war log book, memoirs, photographs, extensive personal and official correspondence, official documents, pilots/handling notes, decorations, mementos, uniform badges and buttons. He flew operations as a pilot with 106 Squadron. After a period of instructing he returned to operations on 582 Squadron but was shot down and became a prisoner of war.

The collection has been donated to the IBCC Digital Archive by Andrew Wareing and catalogued by Nigel Huckins. 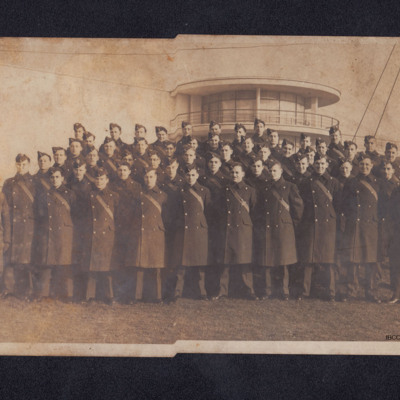 Large group of airmen wearing greatcoats, side caps standing in four rows in front of an Art Deco tower. All have slung gas masks. 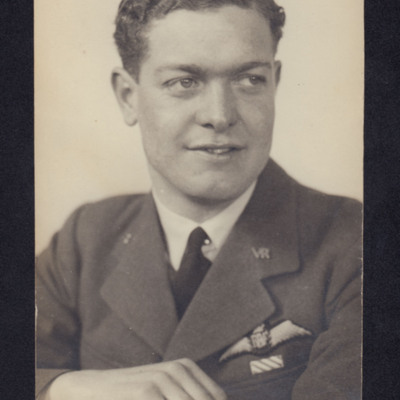 Two aircrew in front of a Hampden 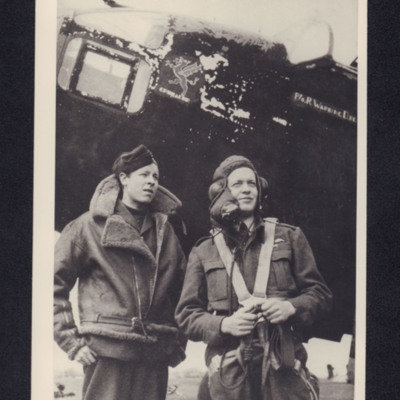 Two aircrew, the one on the left wearing flying jacket and side cap, the one on the right flying helmet and battledress with pilot's brevet and parachute harness. In the background the nose of a Hampden with a dragon and 'P/O R Wareing' painted on… 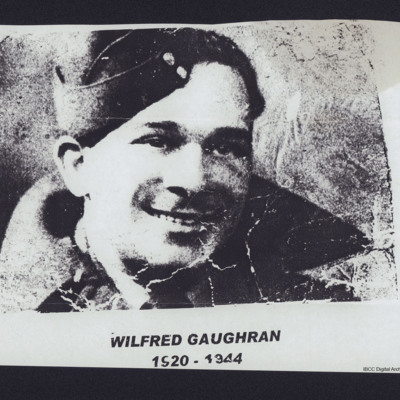 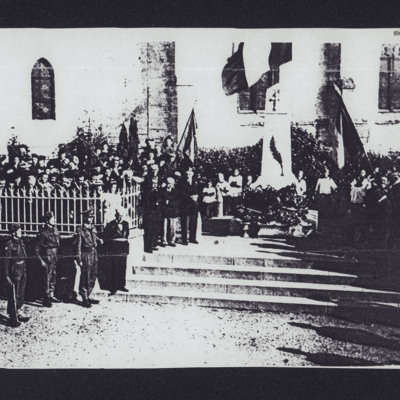 Military guard of honour on left in front of railings. In centre steps leading up to church where a large crown look on. Flags and memorial centre middle and right. In the background part of a church. 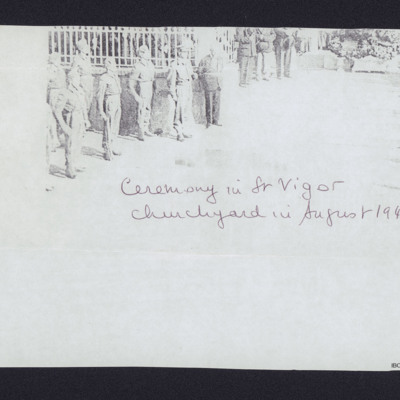 Faded image show an honour guard of troops with rifles on the left with other people in the background. Iron railings behind troops 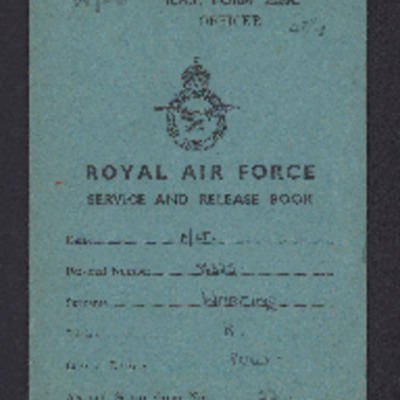 Article about Scunthorpe double DFC baling out from blazing plane. Relates how news was passed by French woman in a letter to a Canadian who posted it to Mrs Wareing. Robert Wareing was in hospital with burns but was getting better. 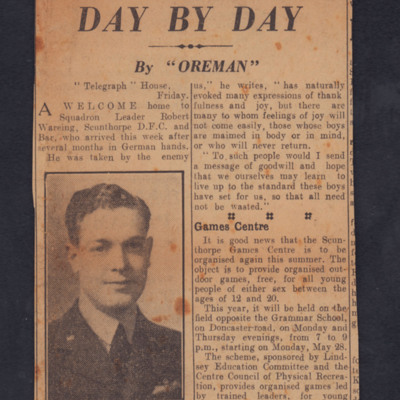 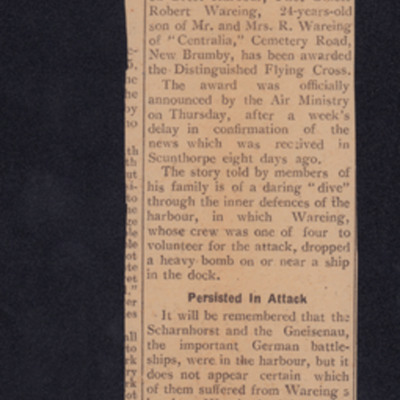 Pilot Officer Robert Wareing awarded DFC for his part in attack on Brest harbour. His was one of four crews who volunteered. Scharnhorst and Gneisenau were in the harbour but was not known if they were damaged. 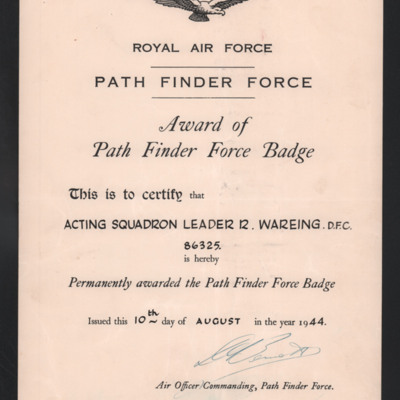 Writes that they had been asked to call on addressee. 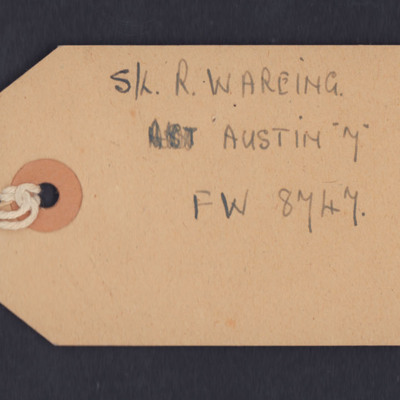 List of crew and next of kin. Nest of kin addresses.

Letter from Robert Wareing to his wife Joan passed on by Captain J M Yeoman, 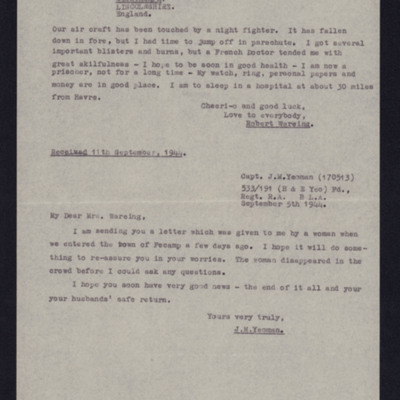 Letter describing Robert's aircraft being shot down, baling out, suffering burns and now a prisoner of war. Yeoman states he was given the letter by a woman when he entered Fecamp. Pilot's psalm two verses each starting with 'The lord is my pilot'.

Musical Zoo or The Ballad of the station masters son 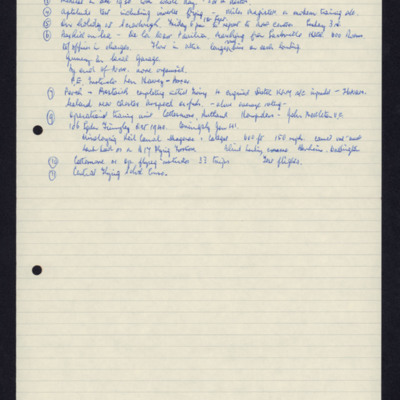 List of events covering joining the RAF, selection for pilot, training and start of operations. Envelope with handwritten list of crew positions with some names 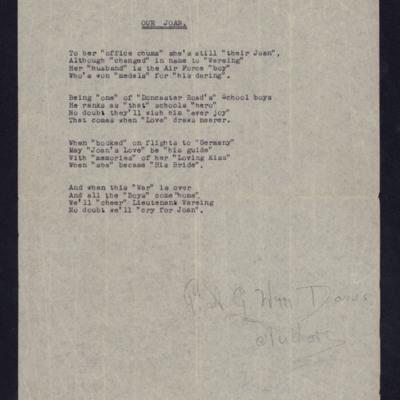 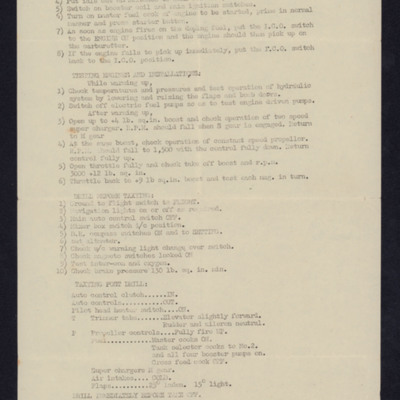 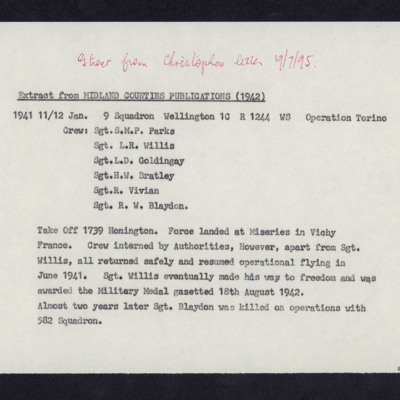 Reports that Wellington crew of 9 Squadron took of on operation from RAF Honington and force landed in Vichy France. Apart from one who eventually made his way to freedom, the other crew returned safely and resumed operational flying. Two years later…
View all 258 items