Letter to Joan Wareing from Muriel 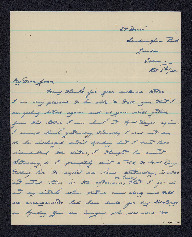 Letter to Joan Wareing from Muriel

Letter from Muriel to her friend Joan. She writes that she has been in hospital but if feeling much better now. She says that she has been very worried during the past few weeks having heard that fighting had broken out in Saarbrucken causing casualties and subsequently had been bombed by the R.A.F. However she has now had a postcard from her husband, Jimmie, and he had been moved and was now at Stalag Luft 3 for which she is very relieved. She asks if Joan has been able to write to her husband, Bob yet and hopes that she will be able to be in contact with him soon. She mentions another friend who’s husband has been reported missing and hopes she soon has news. She also recounts some news that she had read reporting on a Pilot Officer who had been missing for nine months presumed killed, but he was now safe back in Britain.
She hopes Joan has a good holiday and asks after her Mother and Father. She mentions how family and friends are doing and that they have been under attack from Buzz Bombs. She hopes to see Joan soon when she comes home for a visit.