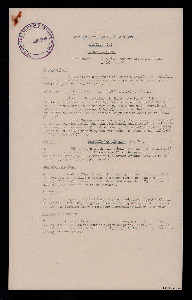 Covers introduction and selection of serving airmen. Followed by section on promotion of aircrew including cases for normal, special, pathfinding and captain of aircraft. Then section on commissioning of aircrew with sections on general principles, recommendation and selection. Posting of airmen covers delegation, types of posting home or overseas. Redundant aircrew covers causes of redundancy, unsuitability, medically unfit, lack of moral fibre, condition of service for permanently unfit aircrew, trade rank and questions..