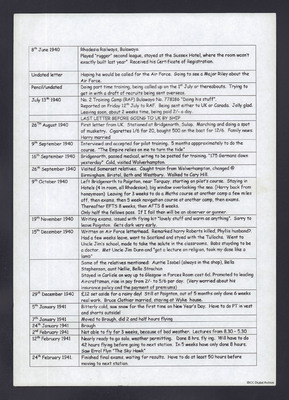 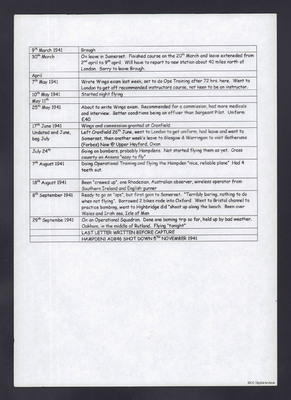 List of twenty-nine letters sent by Donald Baker to his mother between June 1940 and September 1941. Also notes he was shot down on 5 November 1941.

Pencil/undated
Doing part time training, being called up on the 1st July or thereabouts. Trying to get in with a draft of re-cruits being sent overseas.

9th September 1940
Interviewed and accepted for pilot training. 5 months approximately to do the course. “The Empire relies on me to turn the tide”

9th October 1940
Left Bridgenorth to Paignton, near Torquay, starting on pilot’s course. Staying in Hotels (4 in a room, all Rho-desian), big window overlooking the sea. (Harry back from honeymoon) Leaving for 3 weeks to do a Maths course at another camp, then exams.
Thereafter EFTS 8 weeks, then AFTS 8 weeks.
Only half the fellows pass. If I fail then will be an observer or gunner.

15th December 1940
Written on Air Force letterhead. Remarked harry Roberts killed, Phylis husband? Had a few weeks leave, went to Scotland and styed [sic] with the Tullochs. Went to Uncle Jim’s school, made to take the salute in the classrooms. Babs studying to be a doctor. Met Uncle Jim Dunn and “got a lecture on religion, took my dose like a lamb”
Some of the relatives mentioned: Auntie Isobel (always in the shop), Bella Stephenson, aunt Nellie, Bella Strachan
Stayed in Carlisle on way up to Glasgow in Forces Room cost 6d. Promoted to leading Aircraftsman, rise in pay from 2/- to 5/6 per day. (Very worried about his insurance policy and the payment of premiums)

£12 set aside for a rainy day! Still at Paignton, out of 5 months only done 6 weeks real work. Bruce Clothier married, staying at Wyke house.

5th January 1941
Bitterly cold, saw snow for the first time on New Year’s Day. Have to do PT in vest and shorts outside!

12th February 1941
Nearly ready to go solo, weather permitting. Done 8 hrs. flying. Will have to do 42 hours flying before going to next station. In 5 weeks have only done 8 hours.
Saw Errol Flyn [sic] “The Sky Hawk”

24th February 1941
Finished final exams, waiting for results. Have to do at least 50 hours before moving to next station.

30th March
On leave in Somerset. Finished course on the 20th March and leave exteneded [sic] from 2nd april to 9th april. Will have to report to new station about 40 miles north of London. Sorry to leave Brough.

7th May 1941
Wrote Wings exam last week, set to do Ops Training after 72 hrs. here. Went to London to get off recom-mended instructors course, not keen to ba an instructor.

25th May 1941
About to write wings exam. Recommended for a commission, had more medicals and interview. Better con-ditions being an officer than Sargeant [sic] Pilot. Uniform £40.

July 24th
Going on bombers, probably Hapdens. Not started flying them as yet. Cross counrty [sic] on Ansons “easy to fly”

8th September 1941
Ready to go on “ops”, but first goin [sic] to Somerset. “Terribly boring, nothing to do when not flying”. Bor-rowed 2 bikes rode into Oxford. Went to Bristol channel to practice bombing, went to Highbridge did “shoot up along the beach. Been over Wales and Irish sea, Isle of Man

29th Septembe [sic] 1941 On an Operational Squadron. Done one boming [sic] trip so far, held up by bad weather. Oakham, in the middle of Rutland. Flying “tonight”