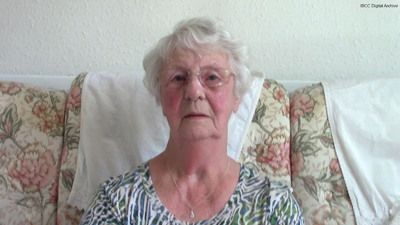 Betty Welton was born in 1924. She left school at the age of fourteen, and at the age of seventeen and a half joined the Women’s Land Army. She saw this as an opportunity to escape her home circumstances. On receiving her papers she travelled from her home town of Wakefield to Buckinghamshire, where she was billeted in Amersham. Her job was shepherdess, and milking the cows. On one occasion she was kicked by a cow, sprained her wrist and went home on leave. When she rejoined she was sent to work at Little Ponton near Grantham and stayed with a family in private billets. When she was billeted near RAF Binbrook she used to hear the Lancaster bombers and count them as they flew over, and remembers cycling to Lincoln to the cinema. She was also a volunteer for the ARP.