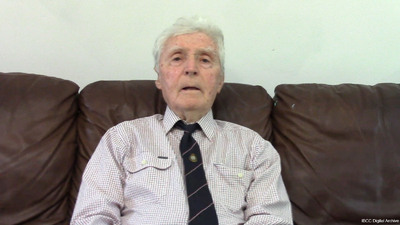 Jeff Mackay was born in 1922 in Ballarat, Australia and was working as a cadet engineer. He joined the Army but when the Japanese entered the war in 1941 decided to join the RAAF, and after boarding a ship he trained as a navigator in Canada and then went to the UK to commence operational training. After flying training at RAF Llandwrog he was sent to RAF Hixon where he crewed up. It was at a local pub that he and his crew met a gentleman who wore a bowler hat and he befriended the crew and the singer of the crew would borrow his hat to sing songs. When they announced that they were being posted away he gave them the bowler hat, and his skipper would wear the hat on operations. He and his crew were posted to 460 Squadron at RAF Binbrook flying Lancasters and flew eleven operations, the last being on Nuremburg.