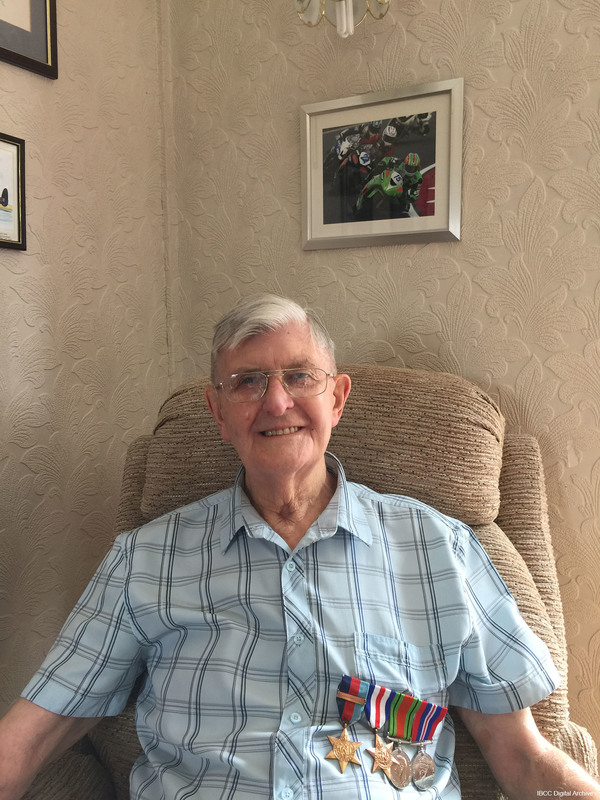 Sidney Marshall grew up in Lincolnshire and worked as an agricultural engineer. He volunteered for the Royal Air Force at eighteen and trained as a flight engineer. On his first operation to Duisburg one of his Lancaster's engines was hit by shrapnel and they returned on three engines. Returning from another operation they had to divert and land at a station in Norfolk with the help of FIDO, as the aircraft was nearly out of fuel. He also discusses what it was like to fly at night over Germany as part of a stream of hundreds of aircraft, and his experiences of VE day celebrations in Boston.

SM: My name is Sid Marshall, I’m recording this for the International Bomber Command Centre on the 8th May 2015. I live in Boston, Lincolnshire, right then? I left school in 1938 at the age of fourteen which most people did in those days, this was about a year before the outbreak of war, so when that started I was still only fifteen, and I had gone to work with a local engineering, agricultural engineering I should say, we were repairing tractors and all kinds of agricultural equipment, and of course this I suppose was considered in war time to be extremely er important, farming, farmers were never called up and that sort of thing, and when I got to be eighteen I er discovered, in conversation with my boss that I was in a reserved occupation, which simply meant that my job was considered more important than me joining the forces, but I think there is a bit of peer pressure comes into it here, everybody keeps saying to me ‘when you joining up, when you joining up’ , and eventually I got a bit fed up with this and I discovered that if I volunteered for aircrew I could get out of it, this was about the only thing I could er go to do, er, which would get me into the forces and away from me civilian job. It’s quite a performance getting in as well, I had, I went one day I was out on the job and I knew the recruiting officer was at the local, [coughs] excuse me, was at the local Job Centre and er so I thought I would go and see them and to my surprise when I got there it was a young lady, and she looked me up and down and I was in my greasy overalls, I suppose I didn’t present a very good picture really, and she said you know I told her I wanted to volunteer for aircrew, and she said, ‘ you know you have to be absolutely fit for aircrew’, and she was sort of trying to be put me off I thought anyway I insisted, and of course that’s how it all started. I didn’t say anything to my boss about it for a start, but I had to tell him when I got called for a medical, I started off, I had to go to Lincoln and this was the same medical that was used for any kind of military service, they used to jokingly say if you had two arms, two feet, and you were felt warm, you were all right, [laughs] you’ve heard that before.

SM: Er, anyway I, eventually came round I had to tell him when I went to Lincoln, I said look, tell the boss ‘I said look I’ve volunteered for aircrew duties and I’ve got to go for a medical’, so I went and this was pretty simple really, and er, I there was then a break of probably a couple of months, and I then had to go to Doncaster which was the full aircrew medical. You had to go and be prepared to stay there for a couple of nights, so the thing was spread over three days really. So anyway I got myself to Doncaster, and I found the Selection Board and all that were in the top floor of a multi-storey shop, and er, the first thing you had of course was the medical because if you didn’t pass the medical then you didn’t go any further, and they were very very strictly, they didn’t exactly turn you inside out but very nearly, you had to blow up columns of mercury and hold them, and you had to do various exercises, you were given a much stricter medical then had been for you know for what I call ground crew job. Anyway I passed the medical okay and in fact if you didn’t that was as far as you went, if you hadn’t passed the medical you were sent home again, that got the first day over. The second day [coughs] because I hadn’t been to Grammar School I had to sit a maths and general knowledge sort of test, anyway as an engineer I had been taking lessons in er [coughs] excuse me, in science, er maths and technical drawing, and of course that had boosted my education enough and I managed to slip past the exam okay, and that was about the last thing on that day. The third day you went before a panel of officers and they asked you what you wanted to do, they interviewed you and er, I realised the fact that I hadn’t been to Grammar School was not going to help me and they said ‘what would I like to do?’, and of course I think everybody wanted to be a pilot originally, anyway I told them I had been studying at night school and that and they said ‘ oh I think you’ll just about make it’, but to try and put me off they said ‘we have got such a lot of applications we probably won’t be able to take you in for seven or eight months’, I think it was just a gag really to put you off. Anyway they then asked me was I what work I had done and as soon as I mentioned that I had been working in engineering for four years, ‘oh your just the chap we want you can become a flight engineer’ and I’m afraid my sealed, fate was sealed at that, so that’s how it all came about. I went back home anyway and told my boss that I’d be going shortly but I was another, I should think another two or three months before they called me up, and er, anyway that was it, he never got on to me about it I think he understood how I felt, and he did say, ‘well your job will be there when you come back’, which was fair enough wasn’t it. Anyway the time came round for me to go and I found myself on Boston Station early one morning with my little suitcase bound for Kings Cross. I got on the first train and er, when I got to Kings Cross there was an NCO working there, waiting I should say, and by that time there were seven or eight of us who were all going to the same place, we had to report to what they call the er, er, oh dear, RTO, that’s the Rail Travel Officer, and er she gathered us all up and then we set off on the underground to St. John’s Wood Tube Station. We got off the station there and there was a corporal there waiting, marched us in some sort of disorder to the holy, holy place, Lords Cricket Ground, that was where it all happened. The first day we got there, we were booked in, they took our names and that sort of thing, and then we were given a card with a number on it and told to go and sit in the grandstands until we were called, of course there were hundreds of other lads there, and er, eventually my lot was called, and you went in and you had another er medical, it was only brief, it was what they called, it had all these er initial letters in the forces, this was an FFI, free from infection, I don’t quite know what they thought what we’d had picked up in the interim, but anyway it wasn’t very severe that one, and we went on, and then er, the next then we got to er [coughs] we went and got kitted out, we were given a kit bag and you went down the line, and I was fascinated by how they got the size of uniform right, there was a sloping line on the wall marked off in feet an inches, and as you walked by one bloke called your height out [laughs].