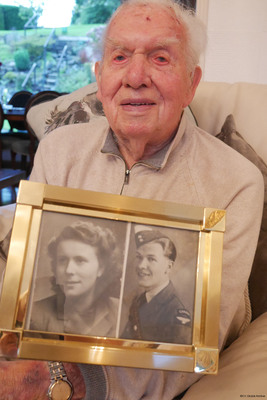 James Ferguson Latimer was born in Edinburgh. His family emigrated to Canada when he was young but moved back to Scotland in 1939. He recalls witnessing a German U-boat torpedo a ship as they sailed back home. Latimer joined the air force and completed basic training at RAF Heaton Park, initially hoping to be a pilot, but qualified as a bomb aimer. He trained on Wellingtons, before converting to Halifax. Latimer was stationed with 102 squadron, based at RAF Pocklington, and 462 squadron, completing 46 operations in total. He details his duty as the bomb aimer during operations, the differing flying tactics of British and American forces, and recollects a night-time operation in August 1944, where he observed a close friend’s plane crash over Braunschweig. He also describes low flying over the English Channel and bombing the German army to support D-Day. Latimer recollects a number of eventful operations including, taking control of the steering when the aircraft left the runway and the pilot lost his nerve, and volunteering to climb out of the aircraft while flying over Germany to release a bomb that had not dropped properly. After completing his operations, he recalls a posting at an Air Sea Rescue Unit in Scotland. Latimer left the RAF in 1946 as a warrant officer, married his wife in 1948, and opened a shop.