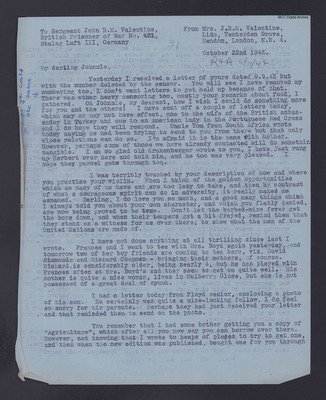 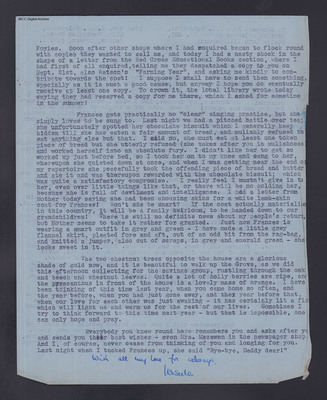 Comments on problems with censorship of letters and tells of her attempts to get food parcels from foreign countries. Mentions she was touched by descriptions of him learning violin. Catches up with family and friends news and her attempts to find agriculture text books. Concludes with news of daughter and local activities.

Yesterday I received a letter of yours dated 9.9.42 but with the number deleted by the censor. You will see I have removed my numbering too, I don’t want letters to get held up because of that. [inserted] you could the same [/inserted] There was other heavy censoring too, mostly your remarks about food, I gathered. Oh Johnnie, my dearest, how I wish I could do something more for you and the others! I have sent off a couple of letters today, which may or may not have effect, one to the wife of the British ambassador in Turkey and one to an American lady in the Portuguese Red Cross and I do hope they will respond. Uncle Tom from South Africa wrote today saying he had been trying to send to you from there but that only close relations can do so. I’m afraid it is the same with Mother. However, perhaps some of those we have already contacted will do something tangible. I am so glad old Krankenberger wrote to you, I have just rung up Herbert over here and told him, and he too was very pleased. I hope they parcel gets through too.

I was terribly touched by your description of how and where you practise your violin. When I think of the golden opportunities which so many of us have and are too lazy to take, and then by contrast of what a courageous spirit can do in adversity, it really makes me ashamed. Darling, I do love you so much, and a good many things which I always told you about your own character, and which you flatly denied, are now being proved to be true. Don’t let the barbed-wire fever get the boys down, and when their tempers get a bit frayed, remind them that they stand as a witness for us over there, to show what the men of the United Nations are made of.

I have not done anything at all thrilling since last I wrote. Frances and I went to tea with Mrs. Boyd again yesterday, and tomorrow two of her boy friends are coming to tea here, viz, David Simmonds and Richard Chapman – bringing their mothers, of course. Richard is considerably older, being nearly 4, but he has played with Frances often at Mrs. Boyd’s and they seem to get on quite well. His mother is quite a nice woman, lives in Mulberry Close, but she is not possessed of a great deal of spunk.

I had a letter today from Floyd senior, enclosing a photo of his son. He certainly was quite a nice-looking fellow, I do feel so sorry for his parents. Perhaps they had just received your letter and that reminded them to send on the photo.

You remember that I had some bother getting you a copy of “Agriculture”, which after all you now say you can borrow over there. However, not knowing that I wrote to heaps of places to try to get one, and then when the new edition was published, bought one for you through

Foyles. Soon after other shops where I had enquired began to flock round with copies they wanted to sell me, and today I had a nasty shock in the shape of a letter from the Red Cross Educational Books section, where I had first of all enquired, telling me they despatched a copy to you on Sept. 21st, also Watson’s “Farming Year”, and asking me kindly to contribute towards the cost! I suppose I shall have to send them something, specially as it is such a good cause, but anyway I hope you do eventually receive at least one copy. To crown it, the local library wrote today saying they had reserved a copy for me there, which I asked for sometime in the summer!

Frances gets practically no “clear” singing practice, but she simply loves to be sung to. Last night we had a pitched battle over tea; she unfortunately spotted her chocolate biscuit which I generally keep hidden till she has eaten a fair amount of bread, and mulishly refused to eat anything else but that. I said no, she must eat at least one token piece of bread but she utterly refused (she takes after you in mulishness) and worked herself into an absolute fury. I didn’t like her to get so worked up just before bed, so I took her on to my knee and sang to her, whereupon she quieted down at once, and when I was getting near the end of my repertoire she peacefully took the offending piece of bread and butter and ate it and was thereupon rewarded with the chocolate biscuit; which was quite a satisfactory compromise. I really feel I mustn’t give in to her, even over little things like that, or there will be no holding her, because she is full of devilment and intelligence. I had a letter from Mother today saying she had been choosing skins for a white lamb-skin coat for Frances! Won’t she be smart? If the coat actually materialises in this country, it will be a family heirloom, to be handed down to our grandchildren! There is still no definite news about my people’s return, but Mother seems to take it rather for granted. Just now Frances is wearing a smart outfit in grey and green – I have made a little grey flannel skirt, pleated for and aft, out of an odd bit from the rag-bag, and knitted a jumper, also out of scraps, in grey and emerald green – she looks sweet in it.

The two chestnut trees opposite the house are a glorious shade of gold now, and it is beautiful to walk up the Grove, as we did this afternoon collecting for the savings group, rustling through the oak and beech and chestnut leaves. Quite a lot of holly berries are ripe, and the pyracanthus [sic] in front of the house is a lovely mass of orange. I have been thinking of this time last year, when you came home so often, and the year before, when you had just gone away, and the year before that, when our love for each other was just awaking – it has certainly lit a fire which will light us and warm us for the rest of our lives. Sometimes I try to think forward to this time next year – but that is impossible, one can only hope and pray.

Everybody you knew round here remembers you and asks after you and sends you their best wishes – even Mrs. MacEwen in the newspaper shop. And I, of course, never cease from thinking of you and longing for you. Last night when I tucked Frances up, she said “Bye-bye, Daddy dear! “

With all my love for always,
Ursula.