674 Items. Collection concerns navigator Warrant Officer J R McKenzie Valentine (1251404 Royal Air Force). The collection contains over 600 letters between JRM Valentine and his wife Ursula. It also contains his log book, family/official documents, a book of violin music studies and other correspondence. Sub-collections contain family photographs, prisoner of war photographs and a scrapbook of newspaper cuttings of events from 1942 to 1945.
He joined 49 Squadron in April 1942 and flew 10 operations on Hampdens. The squadron converted to Manchester in May when he completed two further operations. His aircraft was shot down on the Thousand Bomber raid of 30/31 May 1942. Five crew, including him bailed out successfully and became prisoners of war. The pilot and one air gunner were killed when the aircraft rolled over and crashed.

The collection has been donated to the IBCC Digital Archive by Frances Zagni and catalogued by Nigel Huckins. 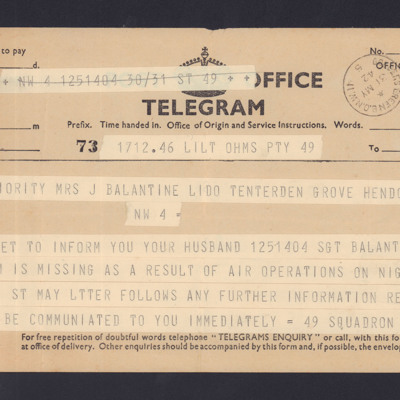 Informs her that husband John is missing as result of operations on night of 30/31 May 1942. 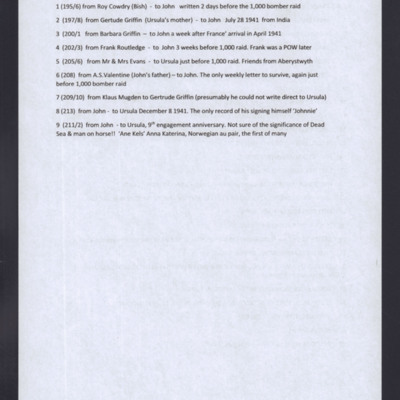 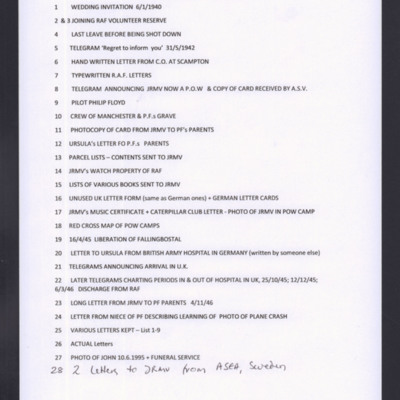 From foreign department of Swedish company. Writer is a business friend of his father's who has asked sender to enquire if John had any special wishes. Informed him that the secretary of a named Swedish organisations had met John at Stalag Luft 6 and…

Letter from foreign department of a Swedish company ASEA. Informing his that sender had received a message from his parents that they were well and that they wished him a happy birthday. 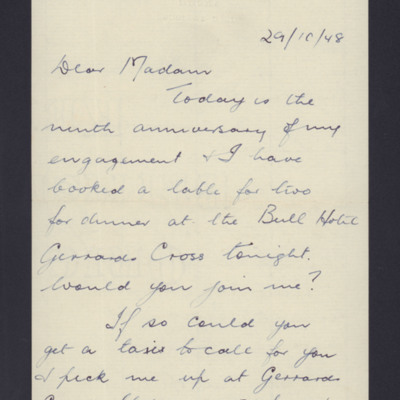 Mentions 9th anniversary of engagement and that he had booked table for two at the Bull Hotel, Gerrards Cross, Request she book taxi and ring to confirm arrangements. Envelope with "Mrs Valentine" and diagram. 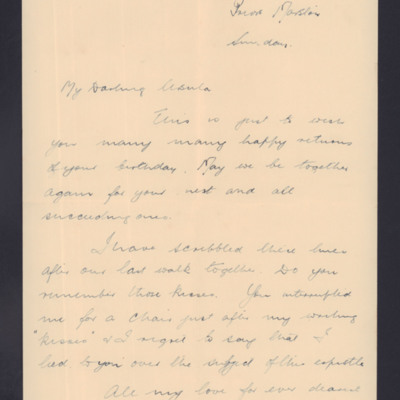 Wishes her happy birthday and reminisces over recent walk with her. 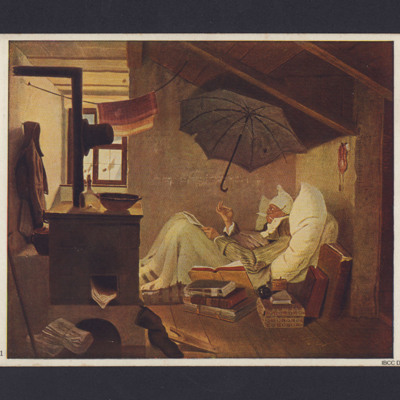 On the front a painting of an old person lying on mattress on the floor with an umbrella above. To the left a stove with window behind. Books piled in front of mattress. On the reverse addressed to mother Griffin thanking for birthday greetings.…

Letter to John Valentine from A S Valentine 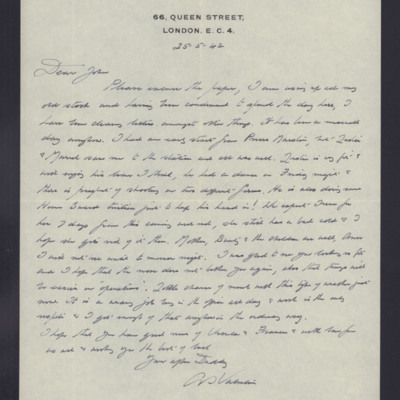 Writes of his recent activities and business dealings. 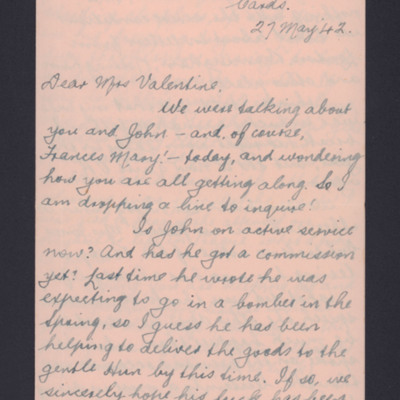 Asks after family and whether John is on active service, had recieved a commission and was on bombers. Catches up with news of other acquaintances and asks after daughter Frances. Mentions their current situation and catches up on their activities,… 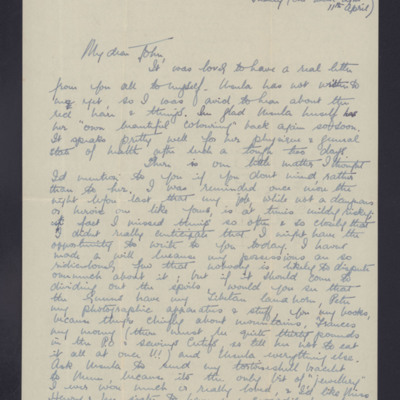 Thanks him for his letter. Provides some comment about her sister Ursula. Continues with request that he help with distributing her possessions to family members if anything should happen to her. Continues with gossip about his rank (Leading…

Letter to John Valentine from his mother in law 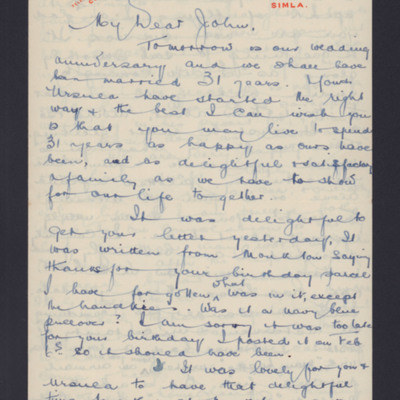 Written from India. Mentions it is her wedding anniversary and hope John and her daughter will have similar length happy marriage. Catches up with family news and asks after his current and future in flying. Writes of their future plans and staying… 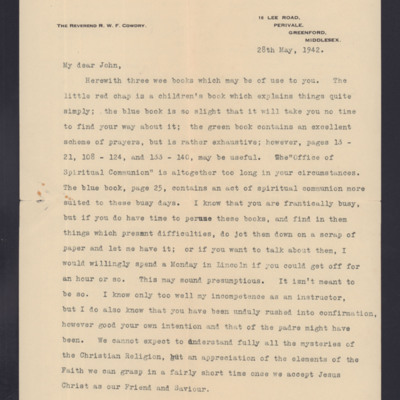 Explains three religious books that he has sent to John Valentine. Catches up with family news.

Account of German witness to crash of John Valentines aircraft

Written by one of Philip Floyd's (pilot of John Valentine's aircraft) brother Michael's children based on conversations with parents. Recounts a letter to a German newspaper from a Werner Gerlach who as a young 15 year old boy witnessed the shooting…

Letter from John Valentine to the father of his pilot 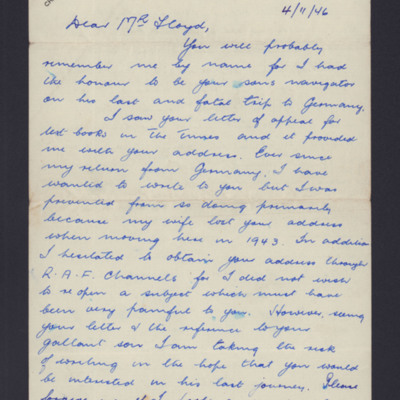 To Mr Floyd, father of Philip Floyd, mentioning that he was his son's navigator and that he had recently discovered Mr Loyd's address. Expresses concern that he might upset Mr Floyd. Provides description of their last operation on 1000 bomber attack…

Summary of medical board 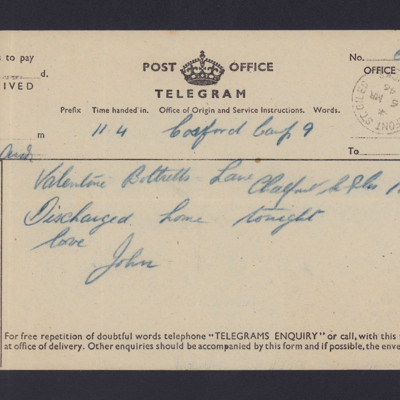 Reports he is discharged home tonight. 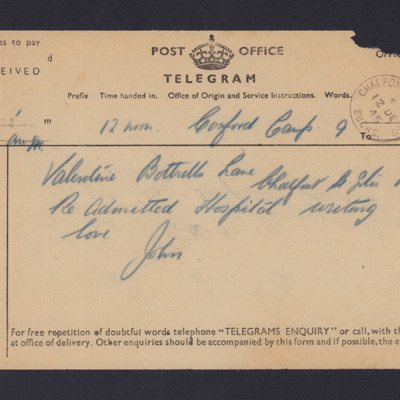 Reporting he had been re-admitted to hospital. 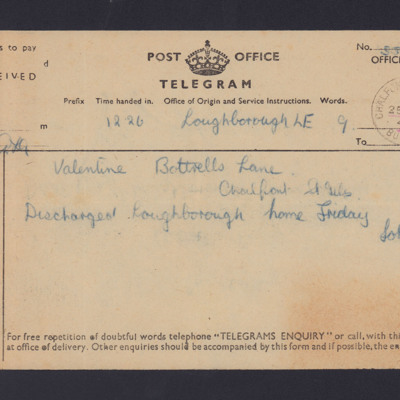 Announcing that he would be discharged from hospital and home Friday.

Announces that she will be coming tomorrow. 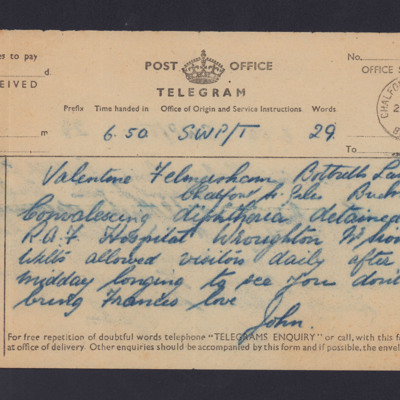 To wife Ursula. Announces convalescing from diphtheria, detained in RAF Hospital Wroughton. Allowed visitors daily after midday, longing to see you. On the reverse train times. 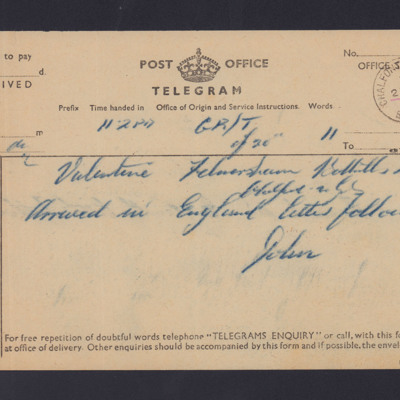 Announces he is back in England. Letter to follow 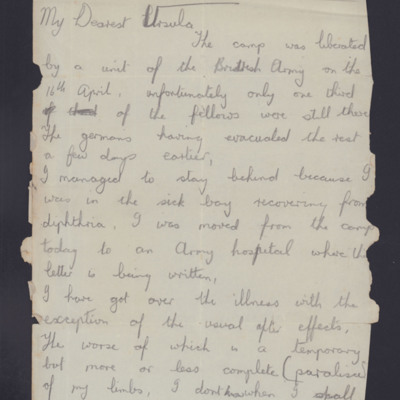 Announces that camp has been liberated but only one third of prisoners were still there. He had been able to stay behind as he was in sick bay recovering from diphtheria. He was over illnes but does not know when he will be back in Britain.

A large group of men cheering and waving at camera. On the reverse 'Not for publication before the daily papers of Saturday April 21st 1945, British Official Photograph No.BU.3703(WK), War Office-Crown copyright reserved, Picture issued April 1945,…
View all 933 items