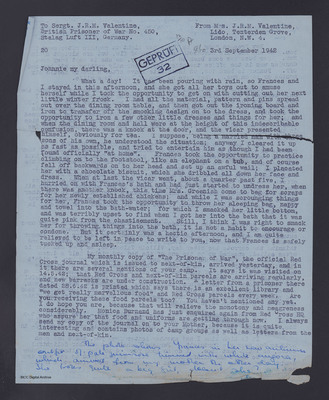 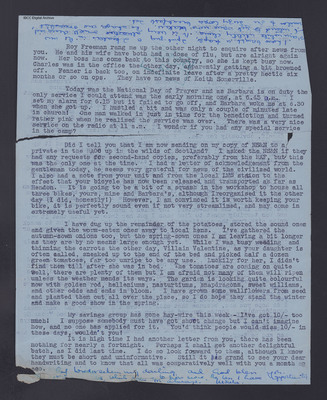 Writes about domestic activities and visit from the vicar. Mentions that monthly copy of prisoner of war official Red Cross Journal had arrived and wonders about accuracy of some statements about food. Continues with more domestic chat and about attending nation day of prayer service. Concludes with other news of her activities in gardening and savings group.

What a day! It has been pouring with rain, so Frances and I stayed in this afternoon, and she got all her toys out to amuse herself while I took the opportunity to get on with cutting out her next little winter frock. I had all the material, pattern and pins spread out over the dining room table, and then got out the ironing board and iron to transfer off the smocking design on to the dress, and took the opportunity to iron a few other little dresses and things for her; and when the dining room and hall were at the heights of this indescribable confusion, there was a knock at the door, and the vicar presented himself, obviously for tea. I suppose, being a married man with three sons of his own, he understood the situation; anyway I cleared it up as fast as possible, and tried to entertain him as though I had been found officially “at home”. Frances took the opportunity to practice climbing on to the footstool, like an elephant on a tub, and of course fell off backwards on to her head and set up an awful wail; I placated her with a chocolate biscuit, which she dribbled all down her face and dress. When at last the vicar went, about a quarter past five, I hurried on with Frances’s bath and had just started to undress her, when there was another knock, this time Mrs. Greenish come to beg for scraps for her newly established chickens; and while I was scrounging things for her, Frances took the opportunity to throw her sleeping bag, nappy and towel into the bath-water; for which I smacked her little bottom, and was terribly upset to find when I got her into the bath that it was quite pink from the chastisement. Still, I think I was right to smack her for throwing things into the bath, it is not a habit to encourage or condone. But it certainly was a hectic afternoon, and I am quite relieved to be left in peace to write to you, now that Frances is safely tucked up and asleep.

My monthly copy of “The Prisoner of War”, the official Red Cross journal which is issued to next-of-kin, arrived yesterday, and in it there are several mentions of your camp. It says it was visited on 14.5.42; that Red Cross and next-of-kin parcels are arriving regularly, and new barracks are under construction. A letter from a prisoner there dated 28.6.42 is printed which says there is an excellent library and “we get really marvellous food” and Red Cross parcels every week. Are you receiving these food parcels too? You haven’t mentioned any yet. I do hope you are, because that will relieve the monotony and meagreness considerably. Monica Burnand has just enquired again from Red Cross HQ who assure her that food and uniforms are getting through now. I always send my copy of the journal on to your Mother, because it is quite interesting and contains photos of camp groups as well as letters from the men and next-of-kin.

The photo shows Frances in her new autumn[?] outfit of pale primrose trimmed with white angora[?], which arrived from my mother the other day. She looks quite a big girl, doesn’t she?

[inserted handwritten] I have bought a teapot, 2 pint jug & 2 beakers in the new plain white utility china. It is very attractive & well designed, & I intend to get some more beakers. The shapes are somewhat similar to our Suzy Cooper breakfast set. [inserted handwritten]

Roy Freeman rang me up the other night to enquire after news from you. He and his wife have both had a dose of flu, but are alright again now. Her boss has come back to this country, so she is kept busy now. Charles was in the office the other day, apparently getting a bit browned off. Fenner is back too, on indefinite leave after a pretty hectic six months or so on ops. They have no news of Keith Somerville.

Today was the National Day of Prayer and as Barbara is on duty the only service I could attend was the early morning one, at 6.45 a.m. I set my alarm for 6.15 but it failed to go off, and Barbara woke me at 6.30 when she got up. I hustled a bit and was only a couple of minutes late in church! One man walked in just in time for the benediction and turned rather pink when he realised the service was over. There was a very nice service on the radio at 11 a.m. I wonder if you had any special service in the camp?

Did I tell you that I am now sending on my copy of NS&N to a private in the RAOC up in the wilds of Scotland? I asked the NS&N if they had any requests for second-hand copies, preferably from the RAF, but this was the only one at the time. I had a letter of acknowledgement from the gentleman today, he seems very grateful for news of the civilised world. I also had a note from your unit and from the local LMS station to the affect that your bicycle has now been released and transported as far as Hendon. It is going to be a bit of a squash in the workshop to house all three bikes, yours, mine and Barbara’s, although I reorganised it the other day (I did, honestly!) However, I am convinced it is worth keeping your bike, it is perfectly sound even if not vary streamlined, and may come in extremely useful yet.

I have dug up the remainder of the potatoes, stored the sound ones and given the worm-eaten ones away to local hens. I’ve gathered the autumn-sown onions too, but the spring-sown ones I am leaving a bit longer as they are by no means large enough yet. While I was busy weeding and thinning the carrots the other day, Villain Valentine, as your daughter is often called, sneaked up to the end of the bed and picked half a dozen green tomatoes, far too unripe to be any use. Luckily for her, I didn’t find them till after she was in bed. The tomatoes are coming on quite well, there are plenty of them but I am afraid not many of them will ripen unless the weather mends its ways. The garden is looking quite colourful now with golden rod, helleniums, nasturtiums, snapdragons, sweet Williams, and other odds and ends in bloom. I have grown some wallflowers from seed and planted them out all over the place, so I do hope they stand the winter and make a good show in the spring.

My savings group has gone hay-wire this week – I’ve got 10/- too much! I suppose somebody must have got short change but I can’t imagine how, and no one has applied for it. You’d think people would miss 10/- in these days, wouldn’t you!

It is high time I had another letter from you, there has been nothing for nearly a fortnight. Perhaps I shall get another delightful batch, as I did last time. I do so look forward to them, although I know they must be short and uninformative. Still it is grand to see your dear handwriting and to know that all was comparatively well with you a month ago.

[inserted handwritten] Auf Wiedersehen my darling, and God bless you. [words missing due to torn and creased paper] which [missing words] to grow more, the less I have opportunity [missing words] for always. Ursula.