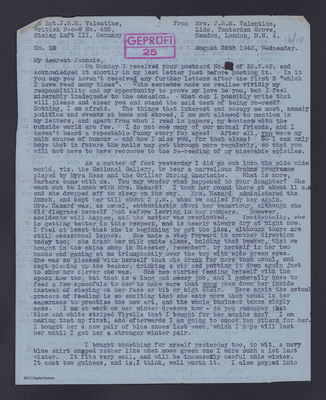 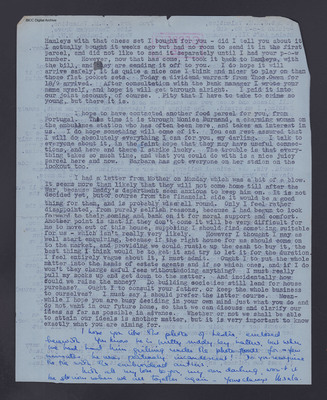 Catches up with received and sent mail and complains about censor restrictions on what she is allowed to write. Continues with description of her and daughters recent activities. Mentions she bought herself a skirt and her plans to send him a chess set. Mentions she is arranging another food parcel to be sent from Portugal. Writes that her parents may not come home until after the war and that she should start enquiring about a new house.

On Monday I received your postcard No. [number censored] of 26.7.42, and acknowledged it shortly in my last letter just before posting it. In it you say you haven’t received any further letters after the first 2 “which I have read many times”. This sentence made me realise vividly my responsibility and my opportunity to prove my love to you, but I feel miserably inadequate to the occasion. What can I possibly write that will please and cheer you and stand the acid test of being re-read? Nothing, I am afraid. The things that interest and occupy me most, namely politics and events at home and abroad, I am not allowed to mention in my letters, and apart from what I read in papers, my contacts with the outside world are few. I do not see many of our mutual friends, and I haven’t heard a repeatable funny story for ages! After all, [underlined] you [/underlined] were my main source of humour - and how I miss you, for that alone! So I can only hope that in future the mails may get through more regularly, so that you will not have to have recourse to the re-reading of my miserable epistles.

As a matter of fact yesterday I did go out into the wide wide world, viz. the national gallery, to hear a marvellous Brahms programme played by Myra Hess and the Griller String Quartette. What is more, Barbara came with me. You may wonder what happened to your daughter? She went out to lunch with Mrs. Hazard! I took her round there at about 11 a.m. and she dropped off to sleep on the way. Mrs. Hazard administered the lunch, and kept her till about 3 p.m. when we called for her again. Mrs. Hazard was, as usual, enthusiastic about her behaviour, although she did disgrace herself just before leaving in her rompers. However, accidents will happen, and the matter was overlooked. Incidentally, she is getting better in this respect, and is nearly always dry at night now. I feel at least that she is beginning to get the idea, although there are still occasional lapses. She made a step forward in another direction today too; she drank her milk quite alone, holding that beaker, that we bought in the china shop in Bicester, remember?, by herself in her two hands and gazing at me triumphantly over the top with wide green eyes. She was so pleased with herself that she drank far more than usual, and kept picking up the beaker, drinking a sip and putting it down again just to show how clever she was. She has started feeding herself with the spoon now too, but that is a long and messy job, and I generally have to feed a few spoonfuls to her to make sure that [underlined] some [/underlined] goes down her inside instead of staying on her face or bib or high chair. Here again the actual process of feeding is so exciting that she eats more than usual in her eagerness to practise the new art, and the whole business takes simply ages. I am at work on her winter dresses now - do you remember that blue and white striped Viyella that I bought for her months ago? I am making up that first, and afterwards I am going to smock two others for her. I bought her a new pair of blue shoes last week, which I hope will last her until I get her a stronger winter pair.

I bought something for myself yesterday too, to wit, a navy blue skirt shaped rather like that moss green one I wore such a lot last winter. It fits very well, and will be immensely useful this winter. It cost two guineas, and is, I think, well worth it. I also popped into

Hamleys with that chess set I bought for you - did I tell you about it I actually bought it weeks ago but had no room to send it in the first parcel, and did not like to send it separately until I had your p-o-w number. However, now that has come, I took it back to Hamleys, with the bill, and they are sending it off to you. I do hope it will arrive safely, it is quite a nice one I think and nicer to play on than those flat pocket sets. Today a dividend warrant from Thos.Owen for 18/9 arrived. After consultation with the bank manager I wrote your name myself, and hope it will get through alright. I paid it into our joint account, of course. Pity that I have to take to crime so young, but there it is.

I hope to have contacted another food parcel for you, from Portugal. This time it is through Monica Burnand, a charming woman on the ambulance station who has often been here, and takes an interest in us. I do hope something will come of it. You can rest assured that I will do absolutely everything I can for you, my darling. I talk to everyone about it, in the faint hope that they may have useful connections, and here and there I strike lucky. The trouble is that everything takes so much time, and what you could do with is a nice juicy parcel here and now. Barbara has got everyone on her station on the lookout too.

I had a letter from Mother on Monday which was a bit of a blow. It seems more than likely that they will not come home till after the War, because Daddy’s department seem anxious to keep him on. It is not decided yet, but of course from the financial side of it would be a good thing for them, and is probably wiser all round. Only I feel rather disappointed, from purely selfish reasons, because I had begun to look forward to their coming and bank on it for moral support and comfort. Another point is that if they don’t come it will be very difficult for me to move out of this house, supposing I should find something suitable for us - which isn’t really very likely. However I thought I may as well start enquiring, because if the right house for us should come on to the market, and providing we could rustle up the cash to buy it, the best thing I think would be to get it and try to let it for the duration. I feel entirely vague about it, I must admit. Ought I to put the whole matter into the hands of estate agents and if so which ones, and if I do won’t they charge awful fees without doing anything? I must really pull my socks up and get down to the matter. And incidentally how could we raise the money? Do building societies still lend for house purchase? Ought I to consult your father, or keep the whole business to ourselves? I must say I should prefer the latter course. Meanwhile I hope you are busy deciding in your own mind just what you do and do not want in our future home, so that we can discuss and clarify our ideas as far as possible in advance. Whether or not we shall be able to attain our ideals is another matter, but it is very important to know exactly what you are aiming for.

I hope you like the photo of Leslie, enclosed herewith. You know he is pretty ruddy by nature, but when we had had him grilling under the photo flashes for a few minutes he was positively incandescent! Do you recognise the tie with the embroidered antlers.

With all my love to you, my own darling, won’t it be glorious when we are together again - Yours always Ursula.