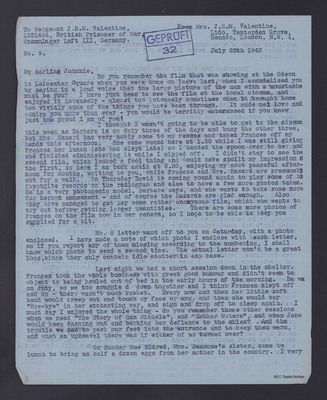 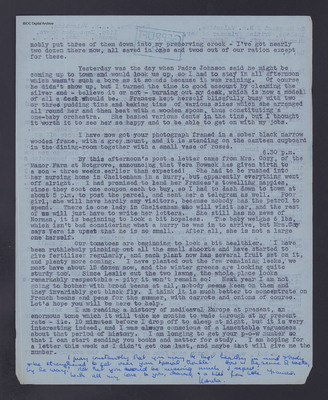 Writes of visits to cinema and of domestic activities. Continues with story of her sister's photographic efforts. Mentions letters she has dispatched with photographs. Writes of spending session in air raid shelter which daughter Frances took in good humour. Continues with news of visitors and catching up with family and friends. Concludes with description of gardening and what she is reading. Hopes to send him books for study.

Do you remember the film that was showing at the Odeon in Leicester Square when you were home of leave last, when I scandalised you by saying in a loud voice that the large picture of the man with a moustache must be you? I have just been to see the film at the local cinema, and enjoyed it intensely – almost too intensely sometimes when it brought home too vividly some of the things you have been through. It made me love and admire you more than ever – you would be terribly embarassed[sic] if you knew just how prud I am of you!

I thought I wasn’t going to be able to get to the cinema this week as Barbara is on duty three of the days and busy the other three, but Mrs. Hazard has very nobly come to my rescue and taken Frances off my hands this afternoon. She came round here at 1.30 while I was still giving Frances her lunch (she had slept late) so I handed the spoon-over to her and she finished administering it while I nipped off. I didn’t stay to see the second film, which looked a fool thing and would have spoilt my impression of the first, so here I am back again at 3.30, enjoying my most peaceful afternoon for months, writing to you, while Frances and Mrs. Hazard are presumably out for a walk. On Thursday David is coming round again to play some of his favourite records on the radiogram and also to have a few more photos taken. He is a very photogenic model, Barbara says, and she wants to take some more for her own amusement – and of course the Hazards are glad enough. Also they have managed to get her some rather anonymous film, which she wants to try out before getting larger quantities. There are some more photos of Frances on the film now in her camera, so I hope to be able to keep you supplied for a bit.

No. 8 letter went off to you on Saturday, with a photo enclosed. I have made a note of which photo I enclose with each letter, so if you report any of them missing according to the numbering, I shall know which photo to send a second time. The actual letter won’t be a great loss, since they only contain idle chatter in any case.

Last night we had a short session down in the shelter. Frances took the whole business with great good humour and didn’t seem to object to being hauled out of bed in the early hours of the morning. Bas was on duty, so we too snuggled down together and I think Frances slept off and on – there wasn’t much racket. Every now and then her little soft hand would creep out and touch my face or arm, and then she would say “Bye-bye” in her enchanting way, and sigh and drop off to sleep again. I must say I enjoyed the whole thing – do you remember those other sessions when we read “The Story of San Michele”, and “Esther Waters”, and when Jane would keep dashing out and barking her defiance to the skies? And the trouble we had to pack our feet into the entrance and to keep them warm, and what an upheaval there was if either of us turned over?

On Sunday Sue Eldred, Mrs. Sansome’s sister, came to lunch to bring us half a dozen eggs from her mother in the country. I very

nobly put three of them down into my preserving crock – I’ve got nearly two dozen there now, all saved in ones and twos out of our ration except for these.

Yesterday was the day when Padre Johnson said he might be coming up to town and would look us up, so I had to stay in all afternoon which wasn’t such a bore as it sounds because it was raining. Of course he didn’t show up, but I turned the time to good account by cleaning the silver and – believe it or not – turning out my desk, which is now a model of all a desk should be. Frances kept herself blissfully busy with two of three pudding tins and baking tins of various sizes which she arranged all round her and then beat with a wooden spoon, thus constituting a one-baby orchestra. She bashed various dents in the tins, but I thought it worth it to see her so happy and to be able to get on with my jobs.

I have now got your photograph framed in a sober black narrow wooden frame, with a grey mount, and it is standing on the canteen cupboard in the dining-room together with a small vase of roses.

By this afternoon’s post a letter came from Mrs. Cory, [inserted] 6.30 p.m. [/inserted] of the Manor Farm at Notgrove, announcing that Vera Bowack has given birth to a son – three weeks earlier than expected! She had to be rushed into her nursing home in Cheltenham in a hurry, but apparently everything went off alright. I had promised to lend her Frances’s towelling nappies, since they cost one coupon each to buy, so I had to dash down to town at about 5 p.m. to post the parcel, and sent her a telegram as well. Poor girl, she will have hardly any visitors, because nobody has the petrol to spend. There is one lady in Cheltenham who will visit here, and the rest of us will just have to write her letters. She still has no news of Norman, it is beginning to look a bit hopeless. The baby weighs 6 lbs, which isn’t bad considering what a hurry he was in to arrive, but Mrs. Cory says Vera is upset that he is so small. After all, she is not a large one herself.

Our tomatoes are beginning to look a bit healthier. I have been ruthlessly pinching out all the small shoots and have started to give fertiliser regularly, and each plant now has several fruit set on it, and plenty more coming. I have planted out the few remaining leeks, ‘we must have about 15 dozen now, and the winter greens are looking quite sturdy too’. Since Leslie cut the two lawns, the whole place looks remarkably respectable – pit it won’t remain so! Next year I am not going to bother with broad beans at all, nobody seems keen on them and they invariably get black fly. I think it is much better to concentrate on French beans and peas for the summer, with carrots and onions of course. Let’s hope you will be here to help.

I am reading a history of medieaval [sic] Europe at present, an enormous tome which it will take me months to wade through at my present rate-ile.[sic] 10 minutes before I drop off to sleep at night, but it is very interesting needed, and I was always conscious of a lamentable vagueness about that period of history. I am longing to get your p-o-w number so that I can start sending you books and matter for study. I am hoping for a letter this week as I didn’t get one last, and maybe that will give me the number.

[inserted] I pray constantly that you may be kept healthy in mind & body & be strengthened to get over your special[?] trouble. How is the sense of taste, by the way? Not that you would be missing much, I expect!

With all my love to you, dearest, & a kiss from little Frances. Ursula.