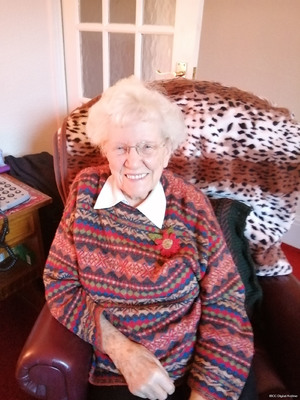 Pat Harrison was born in Lincoln and was the only girl of four children. Her father joined the Royal Air Force after serving as an air raid warden. Pat remembers the arrival of evacuees in Lincoln and also recalls occasions when bombing resulted in fatalities and injuries. She was witness to several friendly aircraft crashes and also makes reference to a Hampden crashing onto the Greestone Stairs and also the use of V-1s. As a young girl, Pat remembers helping her mother with Co-op milk deliveries by horse drawn cart and later using an electric van. She also remembers various buildings, cinemas, fire station, etc. in Lincoln. Pat recalls the bodies of German aircrew being recovered from Brayford pool. In later life, Pat became a nurse and met her husband at Lincoln’s British Legion Club. He had served in the Royal Navy and joined the Police force after the war. They had two daughters.