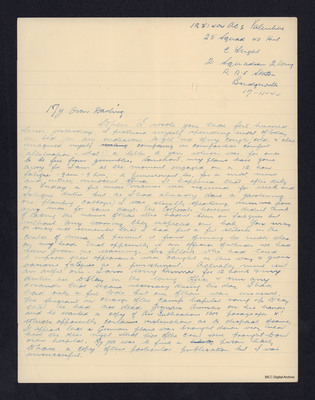 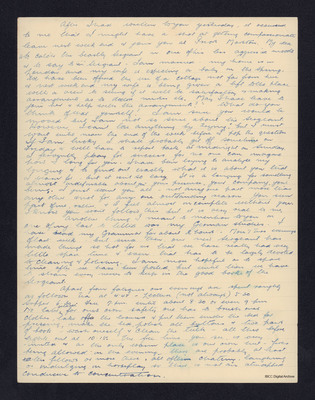 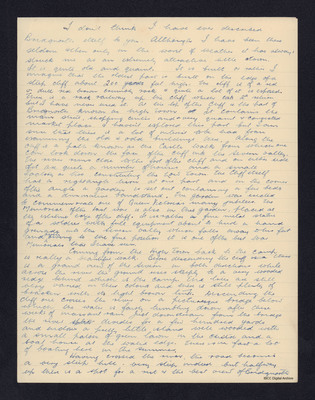 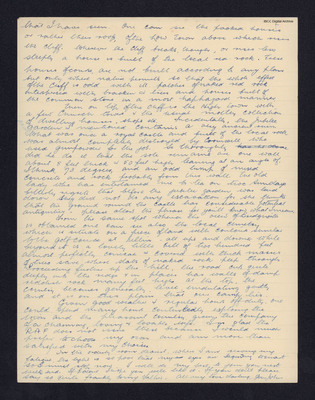 Starts with description of punishment duty and reason for it. Writes of possibility of getting compassionate leave due to immanent birth. Goes on to describe daily activities and then provides a very detailed description of local town of Bridgnorth.

My own Darling
When I wrote you those few hurried lines yesterday, I pictured myself spending most of today in bed in an endeavour to get rid of my cough/cold. I also imagined myself [deleted] writing [/deleted] composing in comparative comfort (allibration[?] – what!) a letter to you which was for once to be free from grumbles. Somehow, my plans have gone awry for I am at the moment engaged on a 12 hour fatigue – 9 am – 9 pm, - a punishment, too, for a most minor and entirely innocent offence. It happened that after duty on Friday a few more names were required for week end fatigue duties but as I had already done a gardening one (planting cabbages) I was, strictly speaking, immune from any more for some days. The Corporal, however, didn’t think of taking the names of those who hadn’t been on fatigues but without any warning they inspected our huts. You may or may not remember that I had put a few stitches in the centre of mine to prevent it from opening too much when on my head. That apparently is an offence of which we had been given no warning. Six[?] fellows who had tried to improve their appearance were caught in this way & given various fatigues as a punishment. Actually mine isn’t an awful one – I am wing Runner for 12 hours & my duties are to stay in the wing office & run any errands that become necessary during the day. I have had only a few to do but one of them was unusual. The Sergeant in charge of the camp hospital rang up to say that he had two dead German Airmen on his hands and he wanted a copy of Air Publications 1307 paragraph X? which apparently contains instructions as to disposal of same. It appears that a German plane was brought down very near here the other night & that two of the crew were brought to our own hospital. My job was to find a [deleted] likely [/deleted] person likely to have a copy of this particular publication but I was unsuccesful. [sic]

After I had written to you yesterday, it occurred to me that I might have a shot at getting compassionate leave next week end & join you at Priors Marston. My idea is to catch the beastly Sergeant on one of his less aggressive moods & to say to him “Sergeant – I am married – my home is in London and my wife is expecting a baby in the Spring. We have been offered the use of a cottage not far from here & next week end my wife is being given a lift to the place with a view to seeing if it will be satisfactory & making arrangements as to doctors nurses etc. May I have leave to join her & help with the arrangements?” What do you think of that yourself? I am sure you would be moved but I am not so sure about the Sergeant. However, I can’t lose anything by trying, but I must wait until nearer the end of the week before & pop the question. If I am lucky I shall probably get off sometime on Friday & will have to report back at midnight on Sunday. I fervently pray for success for no one can imagine how I long for you. I have been trying to analyse my longing & to find out exactly what it is about you that I yearn for – but it isn’t so easy. It is a longing for something almost indefinable about you – your presence, your company, your being. I just want you all – not any one part more than any other & not for any one outstanding reason. You seem part of me, rather & I feel almost incomplete without you. I know you won’t follow this but it is very real to me.

Another thing I meant to mention to you in one of my last to[sic] letters was my German studies. I have read[?] my Grammar for about 2 hours – Mon/Tues evenings of last week but since then our new Sergeant has made things so hot for us that we have really had very little spare & even that has to be largely devoted to cleaning & polishing. I am more hopeful as to spare time after we have been posted but until then we have to strain every nerve to keep in the good books of the Sergeant.

Apart from fatigues our evenings are spent roughly as follows. Tea at 4.45 – Lecture (not always) 5.30 supper 6.30. Free 7 pm. Until about 8.30 or even 9 pm. No later [inserted] because [/inserted] for ones own safety one has to brush our clothes, take off the trousers & put them under the bed for pressing, make the bed, polish all buttons & two pairs of boots – wash oneself & clean the teeth – all this before lights out at 10.15. The free time you see is very limited[?] & as the only warm place is our own hut – fires being allowed in the evening – there are probably at least [deleted two letters] ten fellows or more there, all officers chating[sic], laughing or indulging in horseplay so there is not an atmosphere conducive to concentration.

I don’t think I have ever described Bridgnorth stuff to you. Although I have been there seldom & then only in the worst of weather it has always struck me as an extremely attractive little town. It is quite old and quaint. It is built or rather I imagine that the oldest part is built on the edge of a steep cliff about 200 [deleted] yards [/deleted] feet high. The cliff is of a red or dull red brown crumbly rock & quite a lot of it is exposed. There is a rock railway up the cliff which costs 2d return but I have never used it. At the top of the cliff is the part of Bridgnorth known as high town [deleted] it[?] [/deleted] It contains the main street, shopping centre and a very quaint & congested market place. I haven’t explored this part but I am sure that there is a lot of interest to be had from examining the old & odd buildings there. Along the cliff is a path known as the Castle Walk from which one can look down the face of the cliff into the Severn valley. The river runs close to the foot of the cliff and on either said of it are quite a number of houses and a small factory or two constituting the Low Town. The cliff itself has a right angle turn at one part and in the corner of the angle a garden is set out containing a few beds and a diminutive bandstand. The garden was erected to commemorate one of Queen Victoria’s many jubilees. The Memorial of the last war is also in this garden, placed at the extreme[?] edge of the cliff. It is a rather [deleted] a [/deleted] fine metal statue of a soldier with full equipment about to hurl a hand grenade into the Severn valley which falls away to his feet and [inserted] partly [/inserted] owing to the fine position it is one of the best war Memorials that I have seen.

Coming from the High Town back to the camp is really a beautiful walk. Before descending the cliff [deleted] is a [/deleted] there is a grand view of the Severn in both directions while across the river the ground rises steeply to a very wooded ridge behind which is the camp. The trees are still very varied in their colours and there is still plenty of bracken with its light brown tints. Descending the cliff one crosses the river on a picturesque bridge below which the water is fairly tumbling down after these weeks of incessant r4ain. Just downstream from the bridge the river [deleted] splits [/deleted] divides for a few hundred yards and encloses a pretty little island well wooded with a small patch of green lawn in the centre and a boat house at the water’s edge. There is in fact a lot of boating here in the summer.

Having crossed the river, the road becomes a very steep hill – very steep indeed but halfway up there is a spot for a rest & the best view of Bridgnorth

that I have seen. One can see the packed houses or rather their roofs, of the Low Town above which rises the cliff. Wherever the cliff breaks, though, or rises less steeply a house is built of the local red rock. These houses of course, are not built according to any plans but only where nature permits so that the whole effect of the cliff is odd with its patches of naked red rock interspersed with bracken & trees and houses built of the common stone in a most haphazard manner.

Even on top of the cliff is the High Town with a few Church towers & the usual motley collection of dwelling houses, shops etc. Incidentally, the Jubilee garden I mentioned contains a very ancient ruin what was once a royal castle and built of the local rock was almost completely destroyed by Cromwell who used gunpowder for the job. So thoroughly [deleted] has he done [/deleted] did he do it that the sole remains are one wall about 8 feet thick & 50 feet high leaning at an angle of, I think, 73 degrees, and an odd lump of [one indecipherable word] concrete and rock probably from this wall. The old lady who has entertained me to tea on two Sundays bitterly regrets that before the jubilee garden was laid down they did not do any excavation for she thinks that the ground round the castle has considerable potential antiquities – please allow the phrase for you’ll know what I mean.

From the same spot whence the view of Bridgnorth is obtained one can see also the local cemetry[sic] which is situate on a piece of land with contours similar to the golf course at [one indecipherable word] – all ups and downs – while beyond it is a lovely little hill of two hundred feet almost perfectly conical & covered with thick masses of trees save where slabs of naked rock peep through. Proceeding further up the hill, the road cuts quite deeply into the ridge & in places has walls of damp reddish rock many feet high. At the top, the country becomes generally level, undulating gently and it is on this plain that our camp lies[?.

Given good weather & regular hours off duty, one could spend many hours contentedly exploring the town and the pleasant country, given the company of a charming, loving & lovable wife. I’m glad the RAF does not issue these because I would much prefer to choose my own and am more than satisfied with my choices.

In the orderly room, dearest, when I am serving my fatigue, the light is so poor that my [two deleted letters] eyes are beginning to smart so I must stop now. I will do my best to join you next week end. If I don’t I hope you will like it. If you don’t please say so quite frankly to my Father. All my love darling.
Your John