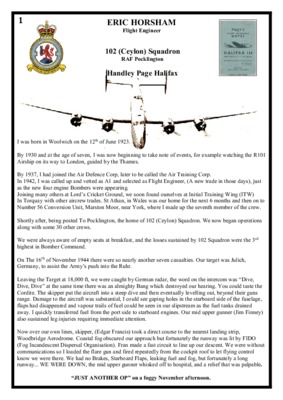 Recollection of Eric Horsham from his early years in Plumstead, training at Lords, Torquay, St Athans, Marston Moor then 102 Squadron at Pocklngton. On one operation they were badly damaged but made a successful forced landing at Woodbridge, assisted by FIDO.
Included is a photograph of the damage sustained to the Halifax's wing.
He details his operations mostly over Germany but also France. He refers to Flying Officer Leonard Cheshire being posted to his squadron.
On the last page is a photograph of his crew in front of a Halifax. Each member is identified -

By 1930 and at the age of seven, I was now beginning to take note of events, for example watching the R101 Airship on its way to London, guided by the Thames.

By 1937, I had joined the Air Defence Corp, later to be called the Air Training Corp.
In 1942, I was called up and vetted as A1 and selected as Flight Engineer, (A new trade in those days), just as the new four engine Bombers were appearing.
Joining many others at Lord’s Cricket Ground, we soon found ourselves at Initial Training Wing (ITW) In [sic] Torquay with other aircrew trades. St Athan, in Wales was our home for the next 6 months and then on to Number 56 Conversion Unit, Marston Moor, near York, where I made up the seventh member of the crew.

Shortly after, being posted To [sic] Pocklington, the home of 102 (Ceylon) Squadron. We now began operations along with some 30 other crews.

We were always aware of empty seats at breakfast, and losses sustained by 102 Squadron were the 3rd highest in Bomber Command.

On The [sic] 16th of November 1944 there were so nearly another seven casualties. Our target was Julich, Germany, to assist the Army’s push into the Ruhr.

Leaving the Target at 18,000 ft, we were caught by German radar, the word on the intercom was “Dive, Dive, Dive” at the same time there was an almighty Bang which destroyed our hearing. You could taste the Cordite. The skipper put the aircraft into a steep dive and then eventually levelling out, beyond their guns range. Damage to the aircraft was substantial, I could see gaping holes in the starboard side of the fuselage, flaps had disappeared and vapour trails of fuel could be seen in our slipstream as the fuel tanks drained away. I quickly transferred fuel from the port side to the starboard engines. Our mid upper gunner (Jim Finney) also sustained leg injuries requiring immediate attention.

Now over our own lines, skipper, (Edgar Francis) took a direct course to the nearest landing strip, Woodbridge Aerodrome. Coastal fog obscured our approach but fortunately the runway was lit by FIDO (Fog Incandescent Dispersal Organisation). Fran made a fast circuit to line up our descent. We were without communications so I loaded the flare gun and fired repeatedly from the cockpit roof to let flying control know we were there. We had no Brakes, Starboard Flaps, leaking fuel and fog, but fortunately a long runway… WE WERE DOWN, the mid upper gunner whisked off to hospital, and a relief that was palpable.

“JUST ANOTHER OP” on a foggy November afternoon.

2
DAMAGE SUSTAINED TO MY HALIFAX ON THE 16TH NOVEMBER 1944
OPERATION TO JULICH.

Note:-
Flying Officer LEONARD CHESHIRE was posted to 102 Squadron in June 1940 and subsequently awarded the (DSO). Then further awarded the (DFC) with promotion to Fight Lieutenant whilst serving with 102 Squadron