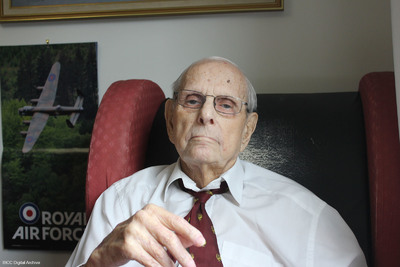 Maurice Stoneman was posted to 57 Squadron at RAF East Kirkby as the flight engineer on Lancasters in 1943. He recalls that on returning from operations they used to fly around the Boston Stump and around Lincoln Cathedral before finally landing. In total Maurice flew 29 operations across Europe. During an early operation mines were dropped in the Königsberg canal, blocking the exit of the German ships the Prinz Eugen and Gneisenau for three weeks. On one operation, anti-aircraft fire had cut the fuel to two engines. They had to crash land on a sandbank in the Wash. Air Sea Rescue came out and picked them up. In February 1944, their aircraft lost its brakes and was diverted to RAF Swinderby where a cable across the runway was used to catch the tail wheel and bring them to a safe stop. During a flight, a German pilot was seen to parachute out of his aircraft and land in the sea. The Air Sea Rescue collected the pilot. He was taken to the squadron mess and entertained by Maurice. An operation to Leipzig resulted in his aircraft being attacked by a Ju 88. The mid upper gunner was seriously wounded, dying later in hospital. The aircraft lost hydraulics and oxygen. Maurice describes this operation as ‘a shaky do’. Transferred to a Lancaster Finishing School as an instructor, and then to 9 Squadron for one final bombing operation before the war ended. He also took part in Operation Manna.