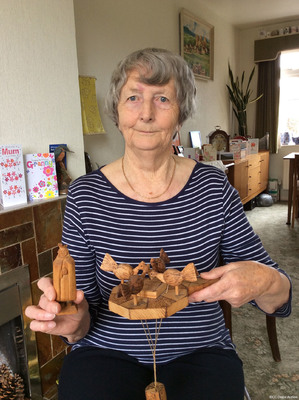 Dinah Smith was born in Bamford, Derbyshire in 1937, moving to Darley Dale when her father found a new job as an aqueduct linesman. Dinah outlines her experiences of school, friends, foraging for food, and celebrations during the war. She also mentions how the end of the war-affected her village with the returning of the men and post-war rural England.
Two experiences of wartime Britain stood out to Dinah, one of these was the sudden appearance of aircraft over her home around 1943, when the nearby reservoir of Errwood was for low-level flying practice. The second experience was with German prisoners of war that worked with her father. She she was given handcrafted wooden toys by the men, which she presumes happened because they missed their families and because her parents were kind to them.