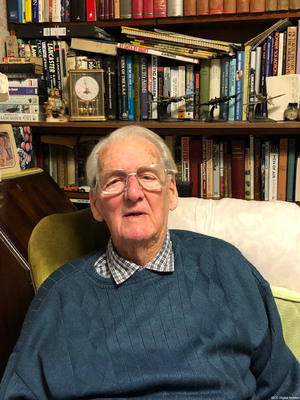 Peter Smith was born in Kent and attended school until he was 14. He started working for a woodwork shop and when the war began, they started building army huts. In 1941 he joined the Air Cadets. He recalls how one Sunday he and a friend saw an aerial dogfight which they watched for two hours. They heard and saw spent ammunition landing on the ground close to them.

In 1942 he attended his RAF medical and was given deferred service. He was called up in March 1943 and attended various training courses to become a rear air gunner. Posted to RAF Lichfield he formed up with his mainly Canadian crew before moving on to an Operational Training Unit flying Whitley’s. At a Heavy Conversion Unit his crew moved to Halifax’s and finally Lancasters. In November 1943 they were posted to RAF Ludford Magna with 101 Squadron. Their first operation took place on 27th January 1944 to Berlin. Peter lists the German towns he was sent to on operations, including Nuremberg in March when the squadron lost seven aircraft. His thirtieth operation was against large guns at Calais. Normally the end of a tour, they were asked to carry out a special duties' operation on the night of 5th June 1944. They flew back and forth between Dover and Paris dropping Window, foil strips, out of the aircraft. It was not until they returned to the station that they were told it was part of the invasion of Europe.

He describes what he did in his spare time and the preparation for operations. Over the thirty-one operations he flew, Peter says that he never had to fire his guns even though he did see some night fighters. Only on one occasion did their aircraft have trouble, when one engine stopped working and there was no power to his rear turret. He describes the various roles he had after completing his tour until he was demobbed in January 1947.