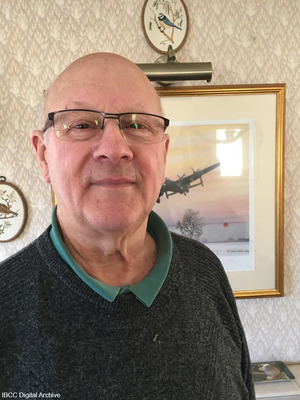 George’s family lived on a farm at Bassingham Fen. His earliest memory of the war was when he was about two and a half, his father pointing out a Lancaster flying over. On 5 November 1944, EH977 Stirling crash-landed nearby and he saw the massive fireball. The horses in the field bolted, one died one survived badly burned. The aircraft was on its way to the Wainfleet site on a bombing practice with the Heavy Conversion Unit. The field adjacent to the crash site was a bombing range in which they practised dropping bombs on a concrete target maintained by George’s father. In 2015, following research, George unveiled a memorial for the crew at the crash site. Excavation by volunteers from Lincolnshire Aircraft Recovery Group gained parts of the aircraft now on display at RAF East Kirkby.