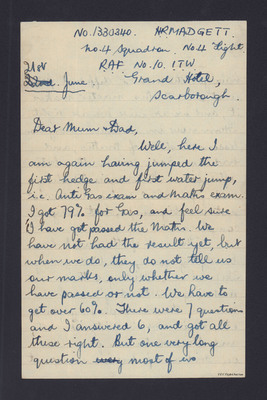 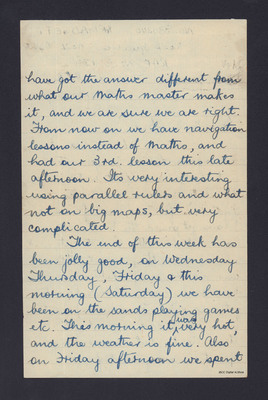 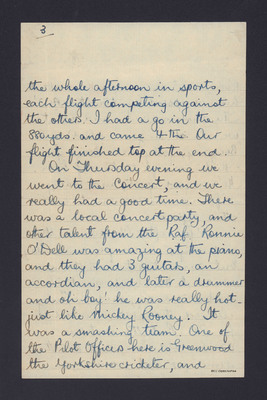 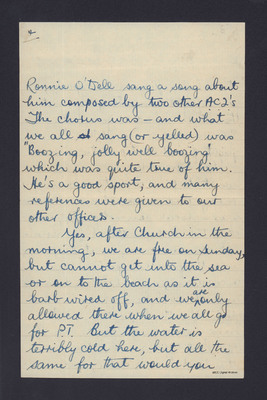 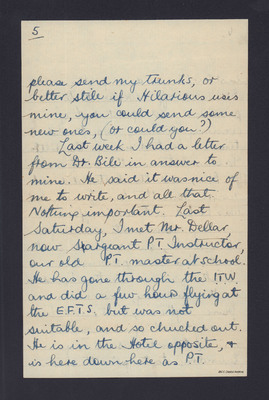 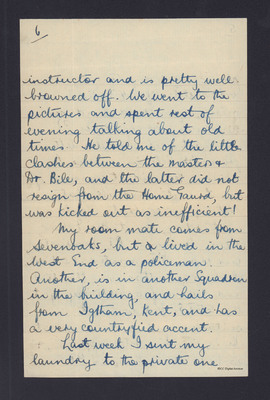 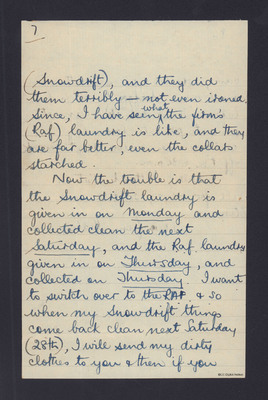 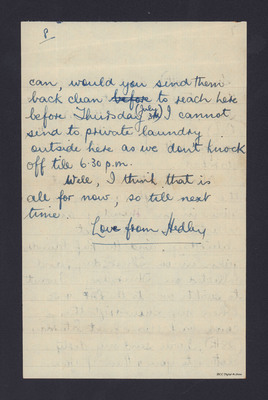 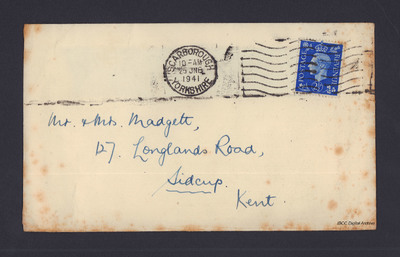 Writes from Grand Hotel Scarborough 10 I.T.W. about his maths and anti gas exams, and starting navigation lessons. He also writes about playing games on the beach at Scarborough against the other flights, going to a concert, meeting his old school P.T. instructor and laundry issues.

[postmark]
[postage stamp]
Mr. & Mrs. Madgett,
127 Longlands Road,
[underlined] Sidcup. [/underlined]
Kent.
[page break]
NO. 1330340. H.R. MADGETT.
no. 4 Squadron. No.4 Flight
R.A.F. No. 10 I.T.W.
Grand Hotel,
Scarborough
[underlined] [deleted] 22nd [/deleted] [inserted] 21st [/inserted]. June. [/underlined]
Dear Mum & Dad,
Well, here I am again having jumped the first hedge and first water jump, i.e. Anti Gas exam and Maths exam. I got 79% for Gas, and feel sure I have got passed the Maths. We have not had the result yet, but when we do, they do not tell us our marks, only whether we have passed or not. We have to get over 60%. There were 7 questions and I answered 6, and got all these right. But one very long question [deleted] every [/deleted] most of us
[page break]
have got the answer different from what our Maths Master makes it, and we are sure we are right. From now on we have navigation lessons instead of Maths, and had our 3rd. lesson this late afternoon. Its very interesting using parallel rulers and what not on big maps, but very complicated.
The end of this week has been jolly good, on Wednesday Thursday, Friday & this morning (Saturday) we have been on the sands playing games etc. This morning it [inserted] was [/inserted] very hot, and the weather is fine. Also on Friday afternoon we spent
[page break]
[underlined] 3 [/underlined]
the whole afternoon in sports, each flight competing against the others. I had a go in the 880 yds. and came 4th. Our flight finished top at the end.
On Thursday evening we went to the Concert, and we really had a good time. There was a local concert party, and other talent from the R.a.f. [sic] Ronnie O’Dell was amazing at the piano, and they had 3 guitars, an accordian, and later a drummer and oh boy! he was really hot – just like Mickey Rooney. It was a smashing team. One of the Pilot Officers here is Greenwood the Yorkshire cricketer, and
[page break]
[underlined] 4 [/underlined]
Ronnie O’Dell sang a song about him composed by two other A.C.2.’s The chorus was – and what we all [deleted] sh [/deleted] sang (or yelled) was “Boozing, jolly well boozing” which was quite true of him. He’s a good sport, and many references were given to our other officers.
Yes, after Church in the morning, we are free on Sunday, but cannot get into the sea or on to the beach as it is barb wired off, and we [inserted] are [/inserted] only allowed there when we all go for P.T. But the water is terribly cold here, but all the same for that would you
[page break]
[underlined] 5 [/underlined]
please send my trunks, or better still if Hilarious uses mine, you could send some new ones, (or could you?)
Last week I had a letter from Dr. Bile in answer to mine. He said it was nice of me to write, and all that. Nothing important. Last Saturday, I met Mr. Dellar, now S[deleted]e[/deleted]argeant P.T. Instructor, our old P.T. master at school. He has gone through the I.T.W. and did a few hours flying at the E.F.T.S. but was not suitable, and so chucked out. He is in the Hotel opposite, & is here down here as P.T.
[page break]
[underlined] 6 [/underlined]
instructor and is pretty well browned off. We went to the pictures and spent rest of evening talking about old times. He told me of the little clashes between the masters & Dr. Bile, and the latter did not resign from the Home Guard, but was kicked out as inefficient!
My room mate comes from Sevenoaks, but [deleted] a [/deleted] lived in the West End as a policeman. Another, is in another Squadron in the building, and hails from Igtham, Kent, and has a very countryfied accent.
Last week I sent my laundry to the private one
[page break]
[underlined] 7 [/underlined]
(Snowdrift), and they did them terribly – not even ironed. Since, I have seen [inserted] what [/inserted] the firm’s (R.a.f) [sic] laundry is like, and they are far better, even the collars starched.
Now the trouble is that the Snowdrift laundry is given in on [underlined] Monday [/underlined] and collected clean the next [underlined] Saturday [/underlined], and the R.a.f. [sic] laundry given in on [underlined] Thursday [/underlined], and collected on [underlined] Thursday [/underlined]. I want to switch over to the R.A.F. & so when my Snowdrift things come back clean next Saturday (28th), I will send my dirty clothes to you & then if you
[page break]
[underlined] 8 [/underlined]
can, would you send them back clean [deleted] before [/deleted] to reach here before Thursday [inserted] (July 3rd) [/inserted] I cannot send to private laundry outside here as we don’t knock off till 6.30 p.m.
Well, I think that is all for now, so till next time.
[underlined] Love from Hedley [/underlined]