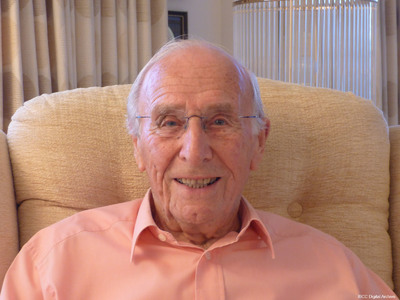 Harold Gardner was a navigator on 106 Squadron based at RAF Metheringham during the final months of World War 2. Known throughout his RAF career as Stan, he was born in Brighton. In 1937 when 14-years-old, his father arranged employment for him with the Brighton Gas Company. Enthralled watching Spitfires flying over the South Coast, Stan volunteered for pilot, navigator, bomb aimer training in 1941 with the RAF. After initial training he was deployed to Canada for pilot training. Although advancing on the course to take-off and landing solo, Stan was uncomfortable in the pilot role and he requested a move to navigator training. After graduating, he returned to the UK and following progression though Operational Training Unit and Lancaster Finishing School, Stan was posted to 106 Squadron in February 1945, with his first operation on the 5th March. He provides a detailed account of the procedure's navigators followed to ensure the aircraft remained on course, including constantly plotting their position and corrections from varying winds. Following the end of hostilities, Stan found himself posted to RAF Cardington in charge of aircrew recruits before being demobilised in 1946, when he returned to his career in the gas industry.