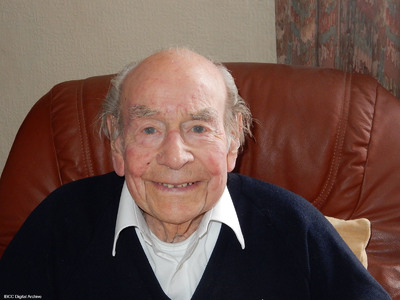 Beginning the war in a reserved occupation, Jack eventually volunteered for the Royal Air Force, however, it would take the majority of the war before he joined. Eventually being called up for Bomber Command in 1944, Jack trained as a wireless operator before becoming a flight engineer. He was sent to RAF St Athan initially for training, before joining 158 Squadron at RAF Lissett to fly Halifax bombers. Throughout his operations, Jack completed 12 operations before his plane was damaged over the Netherlands, having to make a crash landing at RAF Carnaby. He then continues to give information on the Halifax bomber, recounting his experience being hit by a shell during a flight. Jack recounts his time at RAF Lissett as wonderful, living with ‘his own family’, his crew, a family of seven. Reaching the rank of sergeant, he believes he completed 23 operations in total. When the war ended, Jack returned to his pre-war occupation as an instrument maker, keeping in contact with many of his crew throughout the years. He states that it was easy to return to civilian life, but the one thing he missed most was the camaraderie. He is currently involved with the RAF Association.