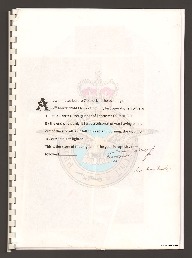 Account of Jim Copus's last operation to Frankfurt during which his 97 Squadron Lancaster was shot down by a Me 110 night fighter. Includes the task of air gunners, the engagement by the night fighter which disabled all hydraulics including those to his turret. His difficulties in escaping from the aircraft, parachuting and capture by hostile civilians before being handed to civil police. His treatment as a prisoner and his journey to prisoner of war camp at Stalag Luft 1 at Barth. Life in camp, liberation by the Russians and repatriation by United States Army Air Force B-17 to England. Includes photographs of Jim Corpus as a wartime airman, prisoner of war and at the RAF Museum in 2010 as well as one of the prisoner of war camp. In addition there are hand drawn maps of north Germany and the Baltic locating Barth and a diagram of the Stalag Luft 1 camp.