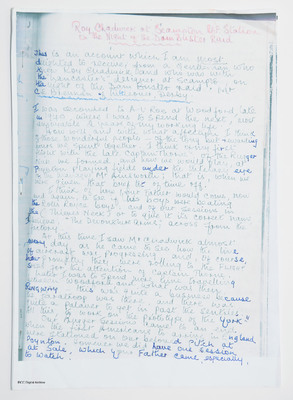 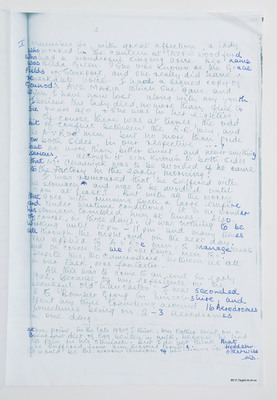 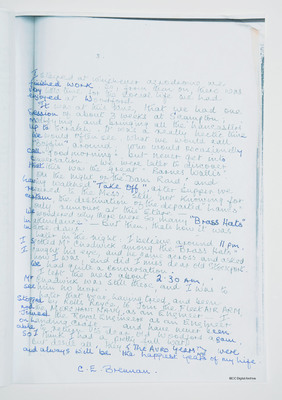 A personal account of life of an engineer, C E Brennan, who was seconded to A V Roe at Woodford and Ringway who saw Roy Chadwick frequently. He talks of comradeship, playing rugby and listening to singer Hilda Green. Mentions the sporting rivalry between A V Roe and Rolls Royce and Roy Chadwick's character. Continues with his secondment to 5 Group and travelling around all their airfields as well as preparing aircraft for the Eder Möhne and Sorpe operation. Talks about the night of the Dams attack and talking to Roy Chadwick. Eventually he joined the Royal Engineers on landing craft and never returned to Woodford.

A short personal observation of life as an engineer at Rolls Royce during the war; as they watched the designer of the Lancaster, Roy Chadwick and later Barnes Wallis, who designed the bouncing bomb, work towards what was to become known as the “Dam Raids.”

[Heading] Roy Chadwick at Scampton RAF Station on the Night of the Dam Buster Raid. [short shaky line]
This is an account which I am [underlined] most [/underlined] delighted to receive; from a Gentleman who knew Roy Chadwick and who was with the “Lancaster’s” designer at Scampton, on the night of the Dam Buster raid. [underlined]Mr C.E. Brennan of Littleover, Derby.[/underlined]
I was seconded to A V Roe [sic] at Woodford, late in 1940, where I was to spend the next, most enjoyable 2 years of my working life.
How well, and with what affection I think of those wonderful people – of the long but rewarding hours we spent together. I think of my first flight with the late Captain Thorne; of the Rugger Club we formed and how we would play, at Poynton playing fields under the tutelary eye of the manager, Mr Ainsworth; that is, when we were given that brief tot [sic] of time off.
I think of how your Father would come, now and again, to see if his boys were beating the Rolls Royce boys; and of our sessions in the (Thieves[sic] Neck) or to give it its [sic]correct name, I believe, “The Devonshire Arms”; across from the factory.
At this time I saw Mr Chadwick almost every day, as he came to see how the line of aircraft was progressing and, of course, how promptly they were rolling to the FLIGHT SHEDS for the attention of Captain Thorne.
Later I was to spend more time travelling between Woodford, and what was then, RINGWAY – this was quite a business because the Paratroop [sic] was there, and there was quite a palaver to get in past the sentries.
Our Rugger sessions came to an end when the first Americans to arrive in England were stationed on our beloved pitch at Poynton. However we did have one session at Sale, which your Father came, especially, to watch.
[page break]

I remember too, with great affection, a lady who worked in the canteen at (AVRO) Woodford who had a wonderful singing voice. Her name was Hilda Green. She was known as the Gracie Fields of Stockport, and she really did have a remarkable voice. I had a signed copy of Gounod’s AVE MARIA which she gave, and which I have now lost; along with my youth. I believe this lady died, no more than five to six years ago; & she was in her eighties.
Of course there was at times, the odd bit of conflict between the R.R. men, and the A V Roe men; but no more than pride on both sides, in our respective ...? [sic] but no more than bitter sweet; and never anything serious, - although it was known to both sides that Mr Chadwick was to be avoided if he came to the factory in the early morning.
It was rumoured that he suffered with his stomach*[sic] and was to be avoided until 10AM at least!! But with all the worry that goes with running such a large empire and under wartime conditions, it is no wonder his stomach troubled him at times. Also, of course, in those days, it was nothing to be working until 10pm - 11pm, and many times all through the night, and on the next day. This applied to A V Roe [e may not have been in original] men, to management and of course to we Rolls Royce men too.
Despite this the camaraderie between us all in our task, was fantastic.
All this was to come to an end in early 1942. Because of my experience on the beautiful old “Lancaster”, I was seconded to 5 Bomber Group in Lincolnshire, and spent my time travelling around 16 Aerodromes sometimes being on 2-3 aerodromes in one day.
[Short shaky line]
at [sic] one point in the late 1930s, I think, my father went on a Breakfast diet of Egg, beaten in milk, because he had this pain in his stomach. But I do not think that he suffered from any serious trouble. It would be the nervous tension of his working life. Hidden otherwise [initialled MD]
[page break]

I stayed at whichever aerodrome we finished work. So, from then on, there was very little time for the social life we had enjoyed at Woodford.
It was at this time, that we had one session of about 3 weeks at Scampton; modifying, and bringing all the 'Lancasters' up to scratch. It was a really hectic time. We would often see, what we would call “Boffin” around; who would occasionally call “good morning”, but never get into conversation. We were later to discover that this was the great “Barnes Wallis”.
On the night of the “Dam Raid”, and having watched “Take Off”, after supper, we repaired to the Mess; still not knowing for certain the destination of the departed “Lancs” only rumours at this stage. -
We wondered why there were so many “Brass Hats” in attendance? – But then, thats [sic] how it was in those days.
Later in the night: I believe around 11pm, I spotted Mr Chadwick among the “Brass Hats”. I caught his eye, and he came across and asked how I was, and did I miss dear old Stockport. We had quite a conversation.
I left the mess about 2.30AM; Mr Chadwick was still there, and I was to see him no more.
Later that year, having tried and been stopped by Rolls Royce, to Join the FLeet AIR ARM, and the MERCHANT NAVY, as an engineer – I Joined [sic] the Royal Engineers as an Engineer on Landing Craft – and have never been able to return to dear old Woodford again. So I think I had a pretty full war.
But despite all, they < The AVRO years > [initalled MD] were and always will be the happiest years of my life.