100 items. An oral history interview with Rosemary Lapham, the daughter of Roy Chadwick, family correspondence, congratulations on being honoured, personal documentation as well as photographs of family, acquaintances and aircraft. The collection also contains a thank you letter from Barnes Wallis to Roy Chadwick and a note from Arthur Harris to Robert Saundby about the in-feasibility of the Eder Möhne and Sorpe operation, some conceptual aircraft drawings and other mementos.

The collection has been loaned to the IBCC Digital Archive for digitisation by Rosemary Lapham and catalogued by Nigel Huckins. 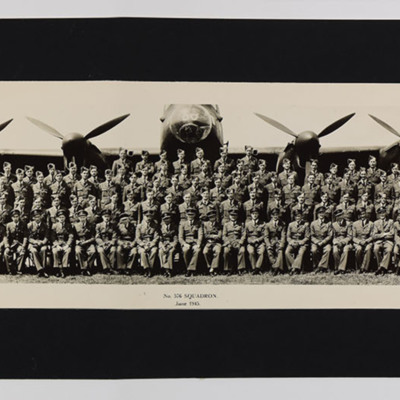 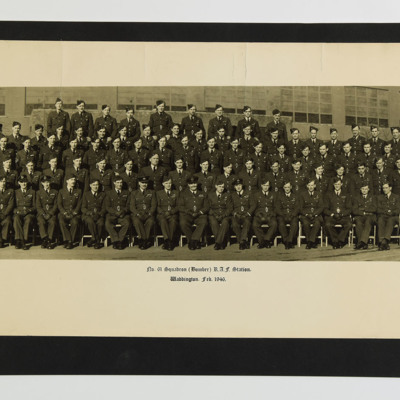 100 plus aircrew in five rows in front of a hangar. Titled '61 Squadron (Bomber) at RAF Station Waddington Feb 1946'.

Roy Chadwick with a model of Avro Tudor 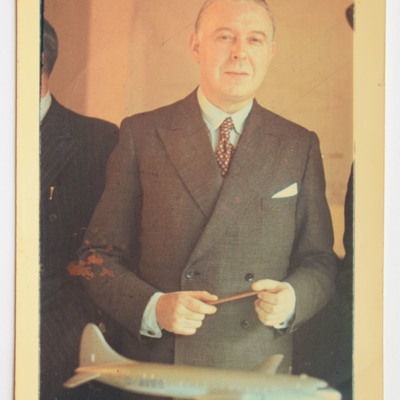 Roy Chadwick stranding wearing suit and holding a pencil. In the foreground the model of a four engine passenger aircraft. On the reverse 'Only copy, (this photograph has been taken from a film (home movie) clip, around 1946). Roy Chadwick in the… 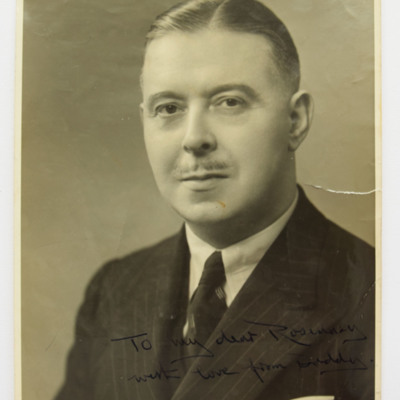 Head and shoulders portrait of Roy Chadwick wearing suit, shirt and tie. Captioned 'To my dear Rosemary with love from Daddy'.

Mary and Roy Chadwick standing in front of car 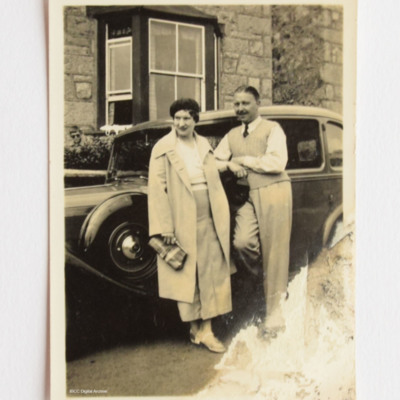 Roy and Mary Chadwick standing by a car 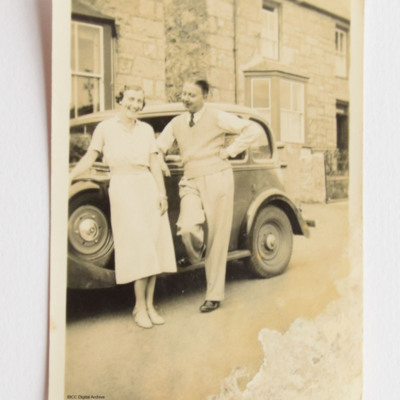 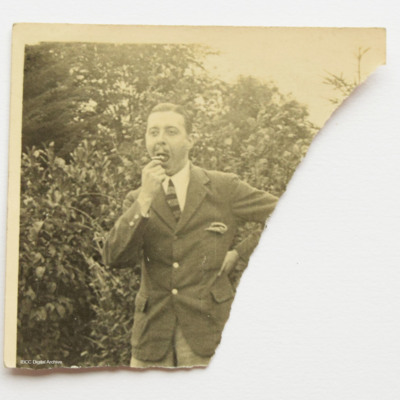 Roy Chadwick wearing jacket and tie putting something in his mouth. In the background bushes. On the reverse '1925, to mouths'. 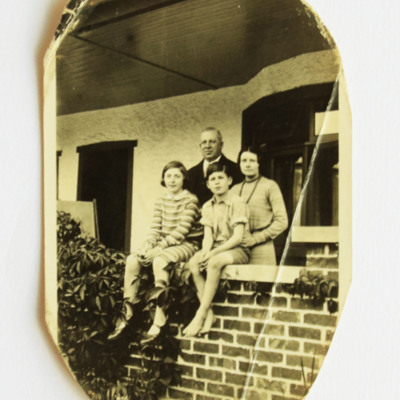 A man and woman standing behind a girl and a boy sitting on a brick wall. In the background a door and window. On the reverse 'Dr Cooke, Roy's doctor who took him to Arbuthnot Lane for the life saving op's after his accident. The Cooke family… 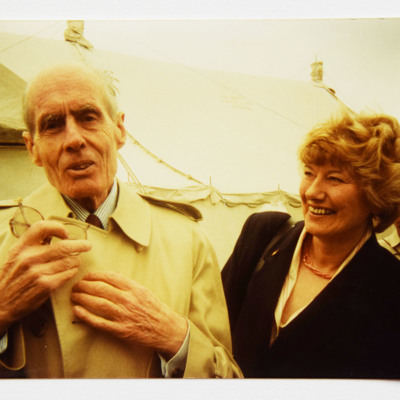 On the left Leonard Cheshire wearing white overcoat holding glasses. On the right Rosemary Lapham in a dark coat smiling towards him. In the background a marquee. 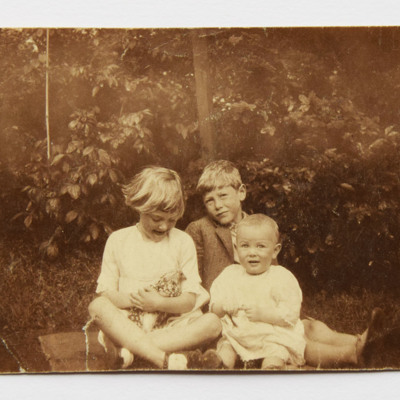 A girl on the left with a chicken in her lap, a boy in the middle and a baby on the right all sitting on a mat on the ground with bushes in the background. On the reverse 'The A V Roe Children'. 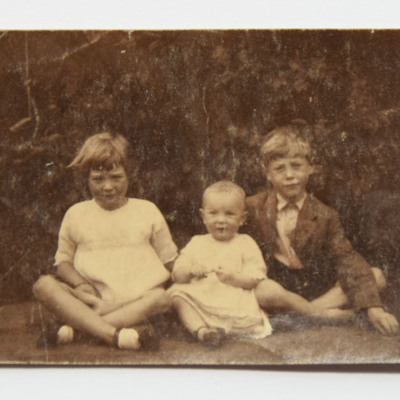 A girl and baby and a boy sitting on a mat with foliage behind. On the reverse 'The Roe Children?'. 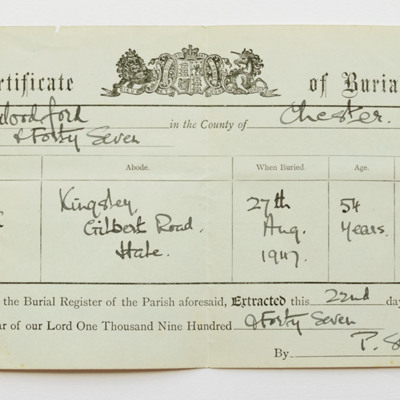 Certificate of burial for Roy Chadwick in parish of Woodford in city of Chester on 27 August 1947. Annotated 'Grave Number M.W. B13 and 14'. 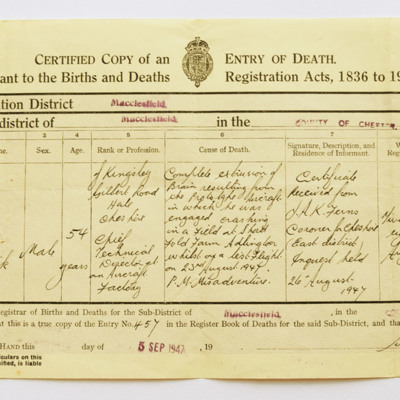 On 23 August 1947 near Adlington, death of Roy Chadwick in aircraft crash. 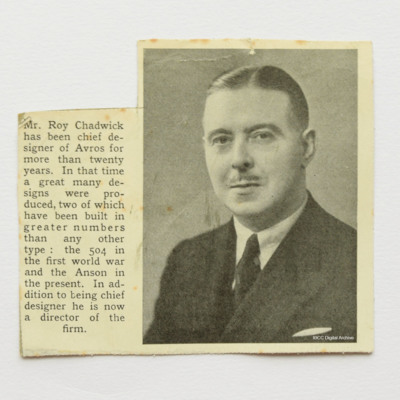 Head and shoulders photograph of Roy Chadwick wearing jacket and tie. Printed details that he was chief designer at Avros for over 20 years and mentioning two aircraft, Avro 504 and Anson, which were built in greater numbers than any other type. 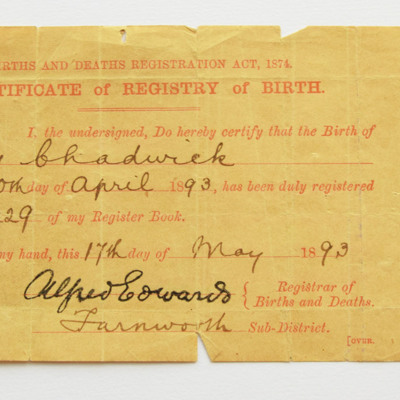 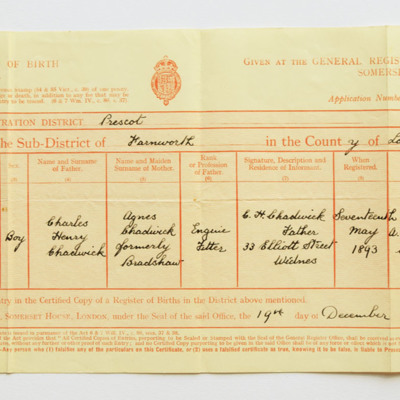 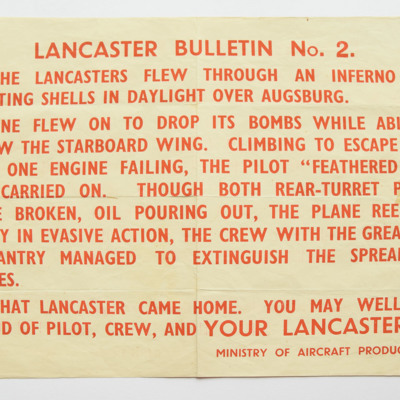 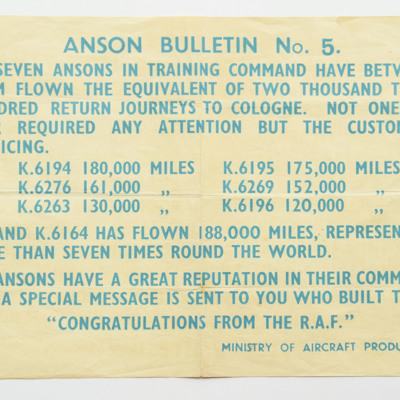 Document noting that seven Ansons have flown the equivalent of two thousand three hundred return journeys to Cologne without anything but customary servicing. Provides details of aircraft and offers congratulations from Royal Air Force.. 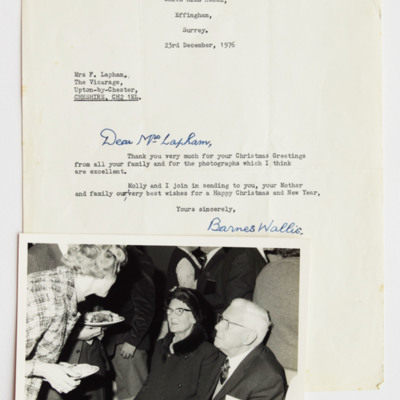 Addressed to Mrs F Lapham thanking her for Christmas greetings and sending their's in return. Signed Barnes Wallis. Enclosed is photograph of Barnes Wallis and a women seated looking up at another woman who is leaning down to talk to them. Three… 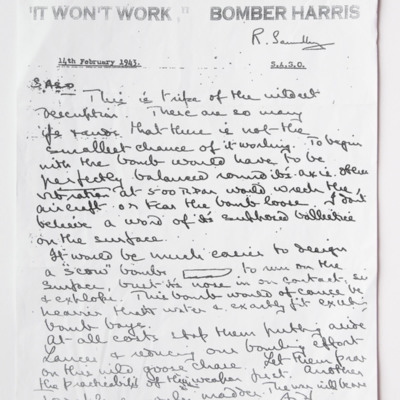 Copy of a note from Arthur Harris to R Saundby with title added 'It won't work Bomber Harris'. States that the idea was tripe of the wildest description with not the smallest chance of working. Goes on with other reasons why it would not work and… 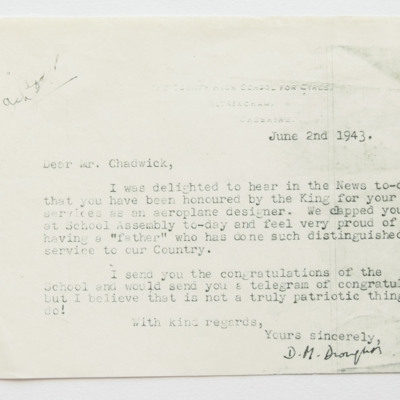 From County high school for girls. Congratulates Roy Chadwick on being honoured by the King for his work as aircraft designer. Proud of having a 'father' who had done service to country. 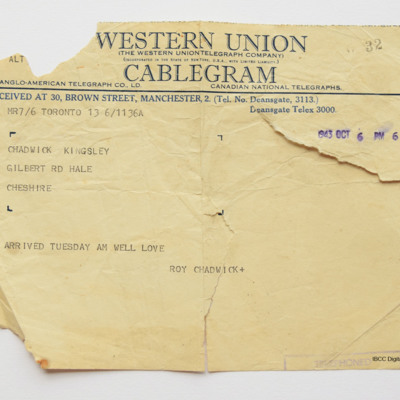 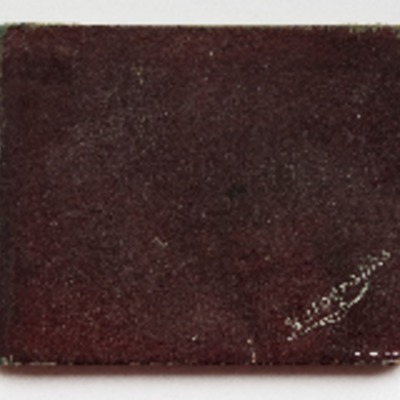 Notebook containing drawings, short essays and notes in English and French by herself, family and other friends as well as several pages of signatures. Include part of a Théophile Gautier's poem. On the first page 'Rosemary Chadwick 1946'.
View all 100 items