Fifty-three items concerning Peter Jenkinson who served as a flight engineer on 166 and 153 Squadron Lancaster and was killed with his crew on 28 January 1945. Collection contains official and family correspondence, photographs, biographies, newspaper articles, official documents, roll of honour and records of operations.

Part of letter from Peter Jenkinson to his mother 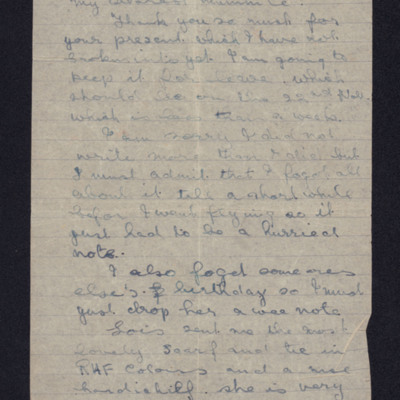 Thanks her for present and mentions leave. Says sorry not to have written more often and that he forgot someone else's birthday. Mentions other gifts received. 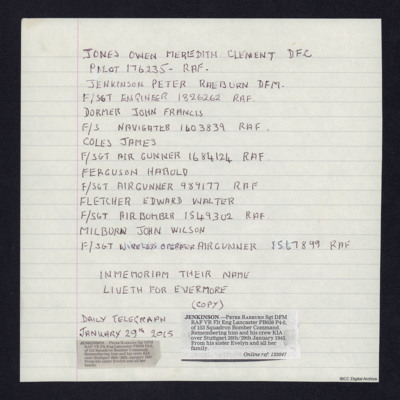 List names of all crew and two newspaper cuttings in memoriam for Peter Jenkinson. 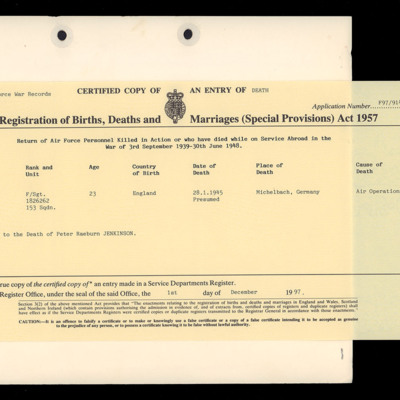 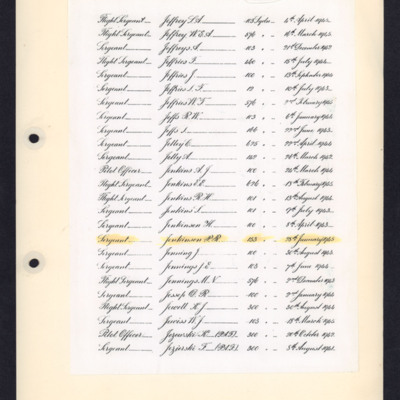 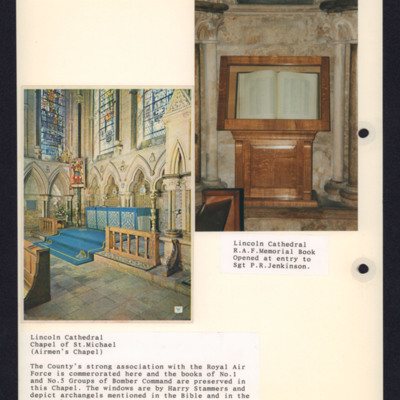 Left a colour photograph of a chapel within cathedral with stained glass windows and altar with columnated arches behind. Right a book on a lectern with note that it was open to page with Peter Jenkinson's name. 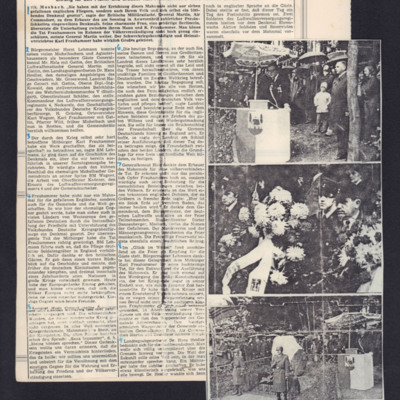 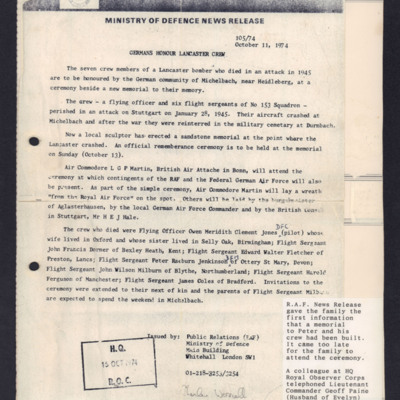 Ministry of Defence news release. Account of memorial to Lancaster bomber crew who crashed near Michelbach on 28 January 1945. Tells of inspiration and building of monument by local man and unveiling along with representatives of the RAF and Federal… 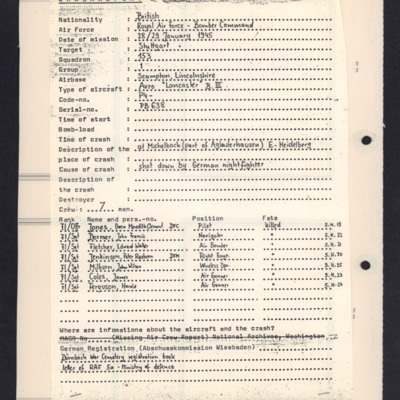 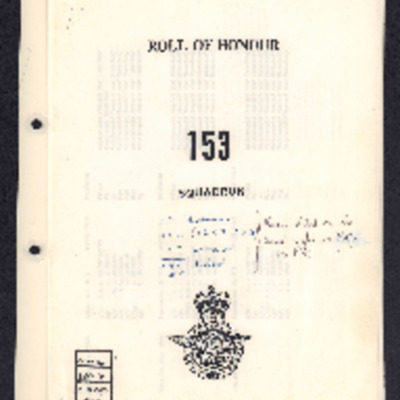 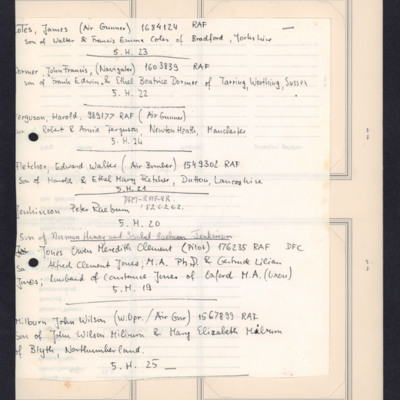 Letter to I R Jenkinson from RAF records office 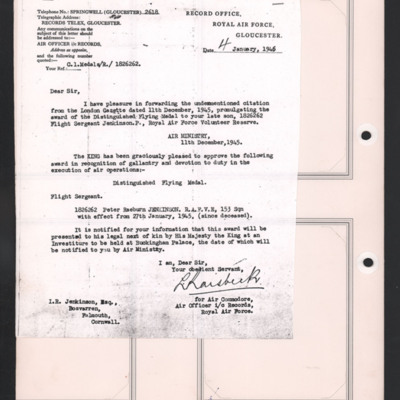 Forwards citation from London Gazette on the award of a Distinguished Flying Medal to his son Peter. Would be presented to his legal next of kin by the King. 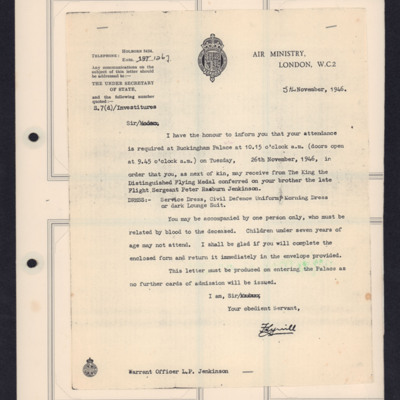 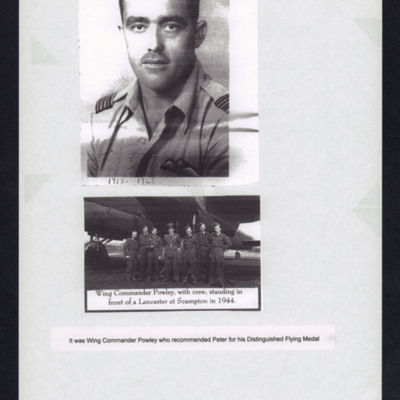 Top - head and shoulders portrait of an officer wearing shirt with rank and pilot's brevet. Captioned '1915-1945'.
Middle - seven aircrew standing in line underneath the wing of a Lancaster. Captioned 'Wing Commander Powley, with crew standing in… 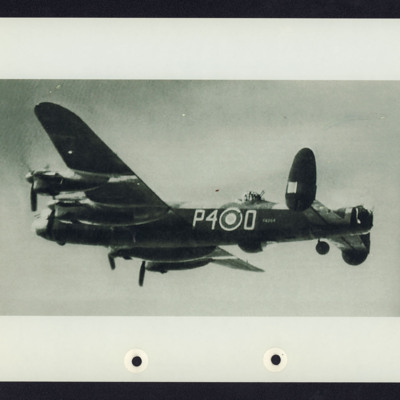 Air-to-air view of the rear quarter of an airborne Lancaster letters 'P4-O'. from slightly below on port side.

A bridge of friendship 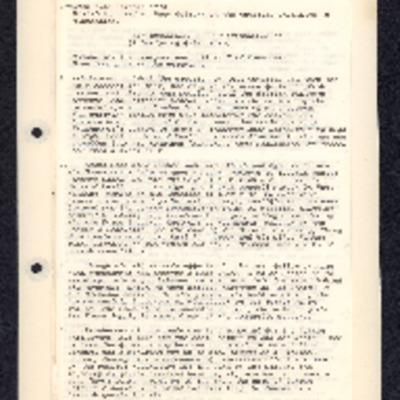 Translated German newspaper article about the building and unveiling of a memorial built by a local man in Michelbach. Writes about Karl Frauhammer who conceived and built it and the unveiling ceremony. At the end a letter from the ministry of…

About the memorial to Peter and his crew 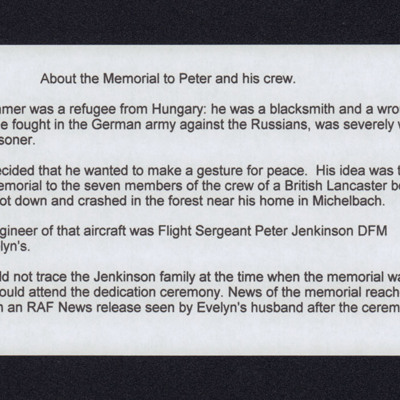 Account of Karl Frauhammer and his decision to make a gesture of peace by building a memorial to the seven members of a Lancaster which was shot down near his home. Flight engineer on aircraft was Peter Jenkinson. Family did not find out about… 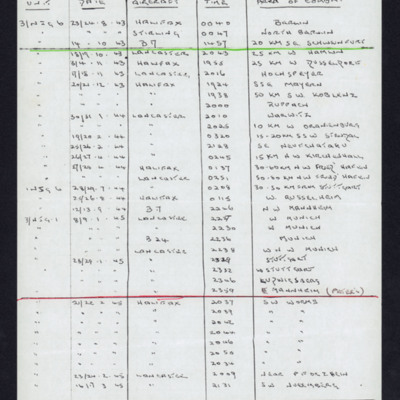 Full face portrait of an officer wearing tunic with pilot's brevet and peaked cap. Captioned with details and that he was pilot of Peter Jenkinson's Lancaster shot down 28 January 1945 all crew killed.
Two notes giving biographic details and record… 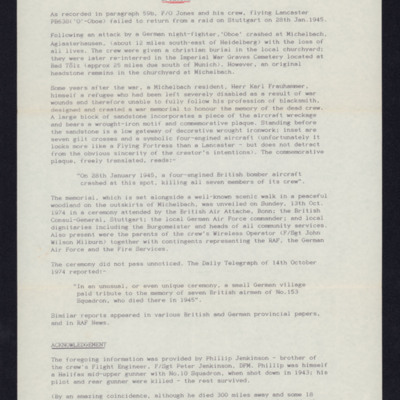 States that Flying Officer Jones and crew failed to return from operation to Stuttgart on 28 January 1945. After attack by German night fighter Lancaster PB638 ('O - Oboe') crashed at Michelbach, Aglasterhausen. Tells of local man designing and…

Recommendation for Honours and Awards (DFM) for Peter Jenkinson 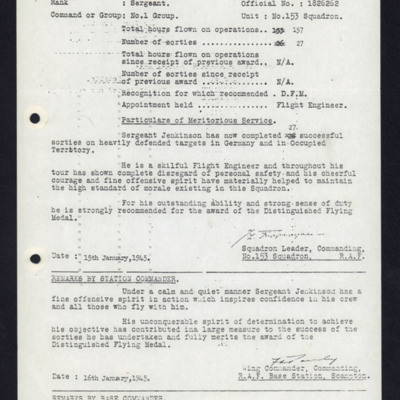 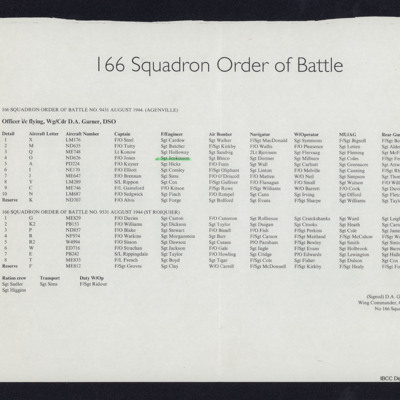 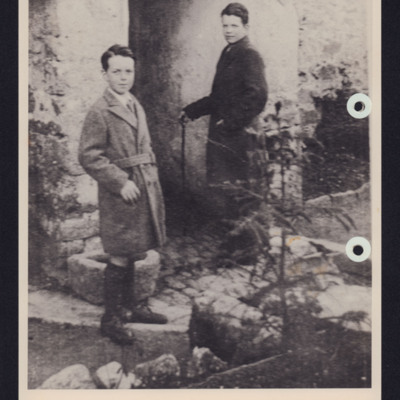 Full length image of two boys wearing overcoats standing on path by steps. Boy on the right has walking stick. In the background an arched stone doorway. Captioned 'Peter with Philip, learning to walk again after his serious illness at 14 years old. 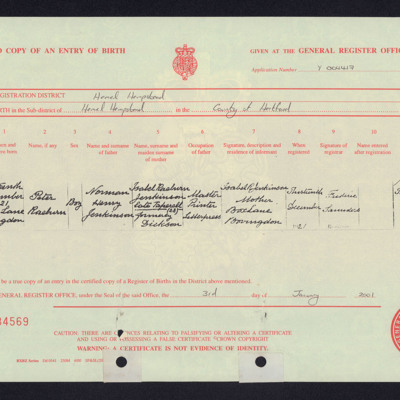 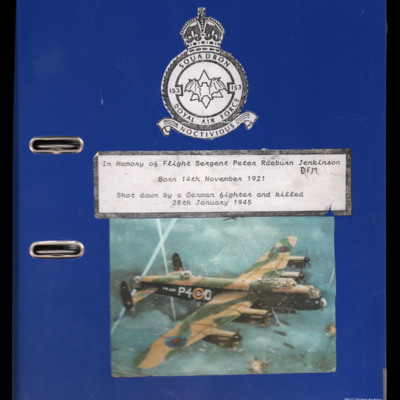 Blue file cover. Top a b/w copy of 153 Squadron badge. Note with title name and born 14 November 1921. Shot down and killed by a German fighter 28 January 1945. Underneath a painting of a Lancaster , letters 'P4-O' airborne dropping bombs.…

Letter from Peter Jenkinson to his mother 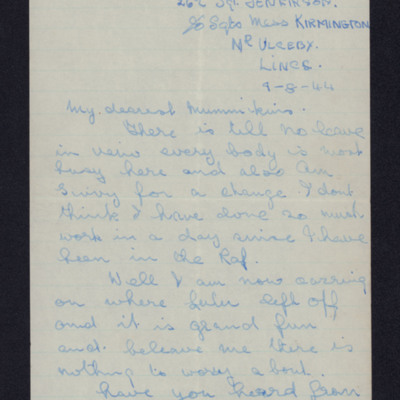 Writes that he is very busy. Comments about his brother and how he would like to "line shoot" with him. Continues with gossip on family matters and what he would like to do when he came home on leave.
View all 53 items