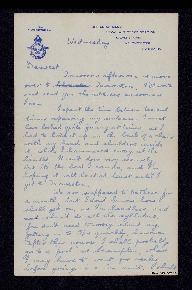 He writes of his move to RAF Turweston, his training schedule and Winston Churchill’s speech.