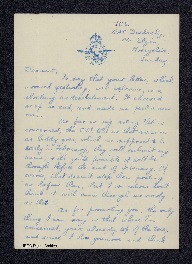 He writes of his social activities, domestic details and of his colleagues.