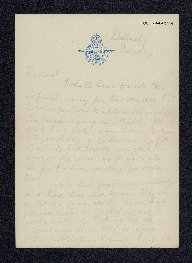 He writes of flying to RAF Banff, meeting ex-colleagues and the weather.

[Royal Air Force crest]
Dallachy
Tuesday
Dearest,
I shall have to write this in pencil, as my pen has run dry. I’ll borrow a pen later to address the envelope. The course is going on steadily. It’s quite hard work, - seven hours lectures etc., each day, & it’s becoming a bit of a bind, but I really am glad I’ve come on the course, as it gives all the gen I’ve been wanting for some time.
We’ve had four exams already, and have three more to come. They are a bit of a farce, really, as we have all our books in front of us, and it’s just a matter of looking up the correct answer in K.Rs or some other publication. Even so, I only got
[page break]
2
80% in the exam we’ve had the marks for, but that was partly because the question I answered wrong wasn’t in the books at all.
I went on to the aerodrome today, & Ozzy Stewart (who asked to be remembered to you), fixed up a trip to Banff. I did all the flying, & coped O.K. (first time in an Oxford for nine months), but my landing wasn’t so hot owing to a very strong gusty cross wind. At one point, after we’d landed at Banff, we had to turn in to a hard standing to avoid another aircraft. The other pilot, who’d been instructing 3 months, took over from me & turned it round, much to my amusement, as he must have thought I should find the turn difficult!
At Banff, I rang up Padg, who came over in his car, an Austin 7, and took me to the Mess. There I saw
[page break]
3
Chisholm & Sutherland, the two nice Australians who arrived at Ossington about 12 months ago, & various other people whom you don’t know. Hoppy & Varn, unfortunately, were away on day off.
Then Padg drove me to Banff, where I met Carol & Mr & Mrs Deffee, who are living with the Padghams. They all asked to be remembered to you.
Young Bob Deffee has grown out of all recognition & is a terrific size. Mrs. Padg has a baby son, six weeks old. She was rather funny on the subject. She said that you & she had been talking to Mrs Robishay at Sutton one day, & that you had definitely said you wouldn’t have a baby. She said she hadn’t been definite,
4
because “you can never be certain.” She hadn’t known about it herself, when she left Ossington, so obviously the baby was unpremeditated. I think it was very remiss of you not to have given her some lessons in [underlined] effective [/underlined] birth control!
I think I’ve given you most of the news about our old acquaintances but Deffee is now waiting for his commission to come through. Coleman has just come out of hospital & has been discharged the service, although he’s allowed to wear his uniform. He has to rest for a year. He was ill with pleurisy but it sounds to me more like tuberculosis. Incidentally, he got married in June, went sick on his honeymoon, & has only just got out of hospital! We’ve been luckier than some people, haven’t we? Even so, I must confess I feel rather envious of the Padghams.
[page break]
5
Padgham told me that Pullen became a Wing Co., but is now reported missing. Johnson is now a Group Captain, so he’ll not go on raids, now, I expect.
One little point I forgot to criticise in your long letter last week is that you seem to expect me to be killed because I’m flying. I take a dim view of that because you must think I am pretty dim. Otherwise, it’s impossible for me to be killed in my present job.
By the way, Ozzy Stewart told me that Paddon couldn’t even remember my name when he saw me. Not very good, is it?
I’m sorry if the fact that you are married made you turn down that Edinburgh job. You do understand, don’t you, darling, that you are to decide
[page break]
6
first of all whether you want any job, & we’ll fix up a way and means for me to see you afterwards. Try & not let my existence influence you in your choice, because I want you to get a job you’d enjoy doing.
Of course I know the Edinburgh job was P.T., & I’m jolly glad you’ve got the Dr’s certificate.
Edinburgh is quite a good place, I believe, but full of [indecipherable word] now.
After the first two days, the weather improved greatly. We’ve had very little rain, [deleted] the [/deleted] it has been much warmer, but we’ve had plenty of high winds. It was very bumpy flying today.
I don’t think I particularly want [indecipherable word] book, unless it’s very good. I never fancy reading speeches somehow.
All my love,
Harold