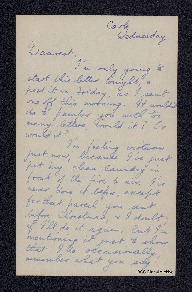 He writes of his duties, activities on camp and colleagues’ postings.

Cark
Wednesday
Dearest,
I’m only going to start this letter tonight, & post it on Friday, as I sent one off this morning. It wouldn’t do to pamper you with too many letters, would it? Or would it?
I’m feeling virtuous just now, because I’ve just put my clean laundry in front of the fire to air. I’ve never done it before, except for that parcel you sent before Christmas, & I doubt if I’ll do it again, but I’m mentioning it just to show that I do occasionally remember what you say.
[page break]
2.
There’s nothing really I want to say apart from one bit of news; it’s just that I want you to know how much I miss you. I know my letters aren’t very good as a rule – all about myself & Ops & that sort of thing, but I want you to remember that I love you more than anything else, even if I don’t say it, & often, when I’m feeling cheesed, just writing to you makes me feel better. It’s only just over two months before I get some more leave, thank God, but it seems ages since I said goodbye at Newhouse. It seems physically
[page break]
3
impossible that it’s only a fortnight ago.
The news is that Coastal Command has asked for 3 of our four Australian instructors & staff pilots to be posted to an Australian Squadron (boats, I think). We’re all shaken to the core, & feel very envious. Moodie & Stockdale will probably be two of them. I wish Fighter Command would ask me to go on Mosquitos!
I said goodbye to Wyver [deleted] ye [/deleted] today. I’m very sorry he’s going, because he’s the best of the whole bunch here. Still, it can’t be helped.
[page break]
4
Thursday 9.30 p.m.
Riches is away on leave today, so I am Flt Cmdr for the time being. The C.F.I. called me into his office & said that he proposed to put me up for Bod’s flight when Bod goes. I’m afraid I didn’t give the news a very hearty reception, as to me it’s rather like a cry of “Wolf.”
Bod hasn’t gone yet & [deleted] he’s [/deleted] I think he’s had the India posting he put in for before Christmas. Still, I think both the C.F.I. & C.O. will get rid of him if they can, as he’s been making such a nuisance of himself the past few months, always binding about Ops.
[page break]
5
Incidentally, if I do get this flight, it will stop my Ops posting for 6 months, but I shan’t mind, & I don’t suppose you will, either.
I had a check ride with the C.F.I. this evening – night flying. He was kind enough to say that I put up a very good show, easily up to A2 standard.
That Australian Coastal Command has boiled itself down to one bloke going, not three, & he [sic] the one who least wanted to go. His wife’s expecting a baby in the next few weeks, & he didn’t want boats anyway!
It was good to get your letter this morning – just like being given a £5 note!
[page break]
6.
I’ll certainly send off the subscription to Smiths’. I’d been wondering about it, & thought they’d have sent you a renewal form.
You don’t say whether the slippers are too big or not. I suppose that means they are, but you’re too polite to say so.
I shouldn’t have known about them but for the fact that Bod had bought a pair for his wife, & brought them in to camp & showed them to me. They were obviously of such good quality that I thought I’d better step in & get you a pair, & they were reasonably cheap, too – 11/6, compared with, I think, 18/6
[page break]
7
I paid last year.
You mustn’t think, however, that I’m going to buy you slippers every year. I hope that next year I shall be able to think of something different.
The Ministry of Labour are a nuisance, aren’t they, in not sending you your permit.
I’m sorry to hear you’ve had flu again. You really must look after yourself, since I can’t do it. Here am I, in very robust good health, unable to do a hand’s turn for you when you’re ill! If you must be ill, save it up for when I’m on leave, so that I can look after you.
Hope Grace & your Mother are better.
All my love,
Harold