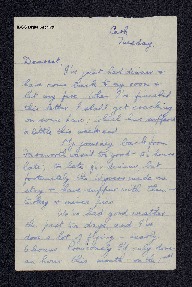 He writes of his colleagues postings and includes details of his income tax assessment.

Cark
Tuesday.
Dearest,
I’ve just had dinner & have come back to my room & lit my fire. When I’ve finished this letter I shall get cracking on some Law, which has suffered a little this week-end
My journey back from Farnworth wasn’t too good – 2 1/2 hours late, too late for dinner, but fortunately the Wyvers made me stay & have supper with them – turkey & mince pies
We’ve had good weather the past two days, and I’ve done a lot of flying – nearly 6 hours. Previously I’d only done an hour this month – on the 1st!
[page break]
2.
In addition, the C.F.I. has instituted a lecture at 4.15, after flying. Each instructor in turn is to give the patter on some aspect of flying instruction, & then we criticise him. Mine is single engine flying. Of course, we think it’s a bind, but really it will do us a lot of good. In February, E.C.7.S. are coming to re-cat us, & the C.F.I. is expecting to put us all up for it.
We didn’t feel too pleased today, however, because we discovered we had some taxying to do after the lecture, & I was too late to have tea. Still, a bit of abstinence will probably
[page break]
3
do me good, as the lazy life I’ve been leading has been making me fat.
There’ve been three postings this week-end. F/Lt Smaile (staff pilot) has gone back to Coastal Command; F/o Squibbs who was my room-mate & sent his Ops form in at the same time as I did, has been posted to a Wimpey O.T.U. (for heavies). He put heavies down as his second choice, after Mosquitos, & so he’s going to Bomber Command. If I hadn’t put Mosquitos only down, I expect I should have gone too.
The biggest surprise
[page break]
4
was Wyver. He became a substantive F/Lt on Dec 6th, & has been posted to Moreton Valence as F/Lt resident [deleted] in [/deleted] instructor. I don’t want the job myself, but if I did, I shouldn’t mind Moreton Valence, as it is 7 miles south of Gloucester, on the Bath road. That would be all right if you were still at Newhouse, wouldn’t it?
Gilligan had a nasty shock this afternoon. His wife rang him up after having taken Dana to see the M.O. Apparently Dana has a swollen gland in the side of her neck, and the M.O. says it is
[page break]
5
tuberculosis, inherited from Mrs. G’s family. Tough luck on the kid, isn’t it?
Incidentally, a propos of Wyver’s posting, I now stand a good chance of getting a F/Lt if Boddy or Riches go. It’s no more than a vague possibility, because (1) Bod & Riches are still here, & when Riches’ Ops form was sent up, the C.O. added a request that he should be allowed to keep Riches. Bod may go to India, but nothing more has been heard about it.
(2) Moodie is senior to me, although he says he has
[page break]
6
arranged with Australian H.Q. for a posting on to Mosquitos.
(3) A new F/O has come to the flight, one Villiers, who was with the C.O. in Africa. He is a great pal of the C.O. & is senior to me; on the other hand, he has been instructing on Tigers, and isn’t qualified on Ansons yet.
I’m going into all this detail just to let you know how matters are. If I am given a flight I shan’t object, but I’d really prefer to go on Ops.
I got my income tax assessment form this week. It seems O.K. to me, & is as
[page break]
7
follows: Pay £292.0.0
Uniform Allowance 23.10
1/10 Earned Income 27.0.0
Personal Allowance [underlined] 140.0.0 [/underlined]
190.10.0 [underlined] 190.10.0 [/underlined]
Taxable Income 101.10.0
Tax payable 32.19.9
Add, from Bath [underlined] 3.8.3 [/underlined]
Total £ [underlined] 36.8.0 [/underlined]
Thank you very much for your Christmas Card, darling. It was very nice of you to send it. I don’t usually approve of the verse on Christmas Cards, but I certainly heartily agreed with the lines “Life will be sweet again
[page break]
8
when we two meet again.”
I trust you’ve been able to have a bath, now that you’ve got your Ideal boiler! It must be a great relief to you to have it, & it came just in time, didn’t it?
It’s a pity we didn’t know about Miss Buck when you were up here, isn’t it? You’d have been able to go and see her.
How unfortunate that the Labour Exchange couldn’t give you your permit! As you say, you’ve probably had that Cambridge job, but never say die!
Didn’t I give you
[page break]
9
directions for finding the Norfolk Hotel? Go to the other end of the Strand from Trafalgar Square, & Surrey St is the first street [deleted] [indecipherable letter] [/deleted] on the right after the traffic lights.
I’m glad you are obeying my “command” about posting letters, though naturally, I shall regret the result. Still, I prefer it that way.
All my love, darling,
Harold