Interview with Reg Payne. One 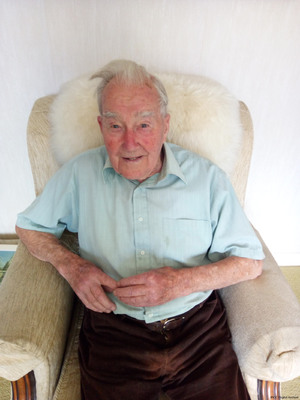 Interview with Reg Payne. One

Reg Payne was born in Kettering, he left school at fourteen and worked for the British Legion. He volunteered for the RAF when he was seventeen and a half and trained as a wireless operator and air gunner. He describes his training learning Morse Code, gunnery practice, and how the crew were chosen, before taking part in operations over Germany where on one occasion a bomb dropped from another aircraft straight through his aircraft's wing. On another occasion whilst on a training exercise his aircraft caught fire and the crew had to bale out sadly four crew were killed. He met his first wife Ena whilst at RAF Skellingthorpe and they married shortly before the end of the war prior to him being posted to 56 Forward Repair Unit in South East Asia Command and sent to Burma. After the war he worked in an engineering factory and still resides in Kettering where he enjoys painting watercolours.